Angel of Death by Ben Cheetham. Second in the Steel City series based in Sheffield.

A disillusioned detective with nothing left to lose.

Catching criminals is all DI Jim Monahan has ever been good at. Just ask his ex-wife. Now he’s staring down the barrel of a lonely retirement. Worse still, he’s no longer sure he believes in the law he’s spent his life upholding. Then comes a call that will test what remains of his belief to its limits and beyond…

A shadowy ring of powerful people who’ll do anything to protect a depraved secret.

In Sheffield a soon-to-be bankrupt businessman has gone on a murderous rampage against his own family. The man and his wife lie dead in their burning mansion. Their son and daughter are found outside, riddled with shotgun pellets, barely alive. It seems like an open-and-shut case. But the charred ruins of the house reveal evidence of a second sickening crime – one involving a young girl who went missing fifteen years earlier…

In Middlesbrough a woman stares down at a violent punter she’s just shot dead. Her entire life Angel has been abused by those who claimed to love her. Now she’s finally had enough. It’s time to stop running. It’s time to start fighting back. She’s going to make them pay for what they did to her. With the murdered man’s gun in her handbag, she heads south on her deadly mission. And as the bodies begin to pile up, only one thing is certain – life will never be the same for anyone caught in the path of the ‘Angel of Death’.

A Man Called Ove by Fredrik Backman. One of the talked about books of the year on my wishlist that luckily featured in the 12 Days of Kindle Sale at 99p.

At first sight, Ove is almost certainly the grumpiest man you will ever meet. He thinks himself surrounded by idiots – neighbours who can’t reverse a trailer properly, joggers, shop assistants who talk in code, and the perpetrators of the vicious coup d’etat that ousted him as Chairman of the Residents’ Association. He will persist in making his daily inspection rounds of the local streets.

But isn’t it rare, these days, to find such old-fashioned clarity of belief and deed? Such unswerving conviction about what the world should be, and a lifelong dedication to making it just so?

In the end, you will see, there is something about Ove that is quite irresistible…

Ruby Flynn by Nadine Dorries. Another Liverpool/Ireland based saga. Another Kindle offer at 99p

The darkest sin casts the longest shadow… RUBY FLYNN, set in Ireland and Liverpool, is the enthralling story of a family haunted by ancient wrongs.

The FitzDeanes are wealthy. They have Ballyford Castle in Ireland and a growing shipping business in Liverpool. But Lady FitzDeane is unable to provide an heir. All of her five boys have died in infancy. There are whispers that the family is cursed – punished for a terrible mistake long buried in the past.

When young Ruby Flynn, an orphan reared and educated by nuns, arrives at Ballyford to work as a nursery maid, she cannot shake the feeling that she has been there before. But when?

Soon rumours and strong emotions are swirling around the beautiful girl with red hair, green eyes – and a mysterious past. Who is she really? And what will her arrival mean for this powerful family, riven by tragedy?

In Bitter Chill by Sarah Ward. A book I keep reading a lot about and only 99p in the 12 days of Kindle Sale.

Rachel Jones has tried to put the past behind her and move on with her life. But news of the suicide re-opens old wounds and Rachel realises that the only way she can have a future is to finally discover what really happened all those years ago.

This is a story about loss and family secrets, and how often the very darkest secrets are those that are closest to you.

A stunning novel set in the wake of the Second World War, Little Exiles tells the extraordinary story of the forced child migration between Britain and Australia that took place after World War II and how this flight from home shaped the identity of a generation of children.

Jon Heather, proud to be nearly nine, knows that Christmas is a time for family. But one evening in December 1948, no longer able to cope, his mother leaves him by a door, above which the legend reads Chapeltown Boys’ Home of the Children’s Crusade. Several weeks later, still certain his mother will come back, Jon finds himself on a boat set for Australia. Promised paradise, Jon soon realizes the reality of the vast Australian outback is very different; its burnished desert becoming the backdrop for a strict regime of hard work and discipline.

So begins an odyssey that will last a lifetime, as Jon Heather and his group of unlikely friends battle to make their way back home. 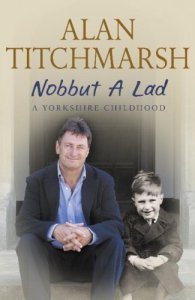 Nobbut a Lad by Alan Titchmarsh. Childhood memoirs of a fellow Yorkshire tyke and another charity shop bargain at 20p.

‘Give me the boy and I will show you the man’ the saying goes. In this warm, tender, wonderfully evocative and often hilarious memoir one of the best-loved men in Britain, Alan Titchmarsh, brilliantly recalls his childhood in 1950s Yorkshire.
Growing up in the beautiful landscape that surrounds Ilkley in Wharfedale inspired Alan’s early passion for nature.
In a time of post-war austerity, hard work and ‘making do’ was not just the lot of the grown-ups; for the young Alan it was also the simplest pleasures that were the best – whether it was climbing trees, fishing in streams, or riding wooden carts fitted with old pram wheels.
With the sharpest eye for detail and vivid recall, he brings to life the various family members, school friends – and foes – teachers and local characters who became the powerful early influences of Alan’s life.
A joy from beginning to end, this is a classic childhood memoir. 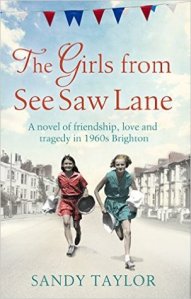 The Girls from See Saw Lane by Sandy Taylor. Another book I keep reading good things about and luckily available via NetGalley

Brighton 1963. Mary Pickles and I walked along the street with our arms linked, looking in shop windows. We were best friends and together we were invincible.

Dottie and Mary forged a friendship over a bag of penny sweets when they were eight years old. They’ve shared everything together since then – the highs and lows of school, family dramas, hopes and dreams and now, at seventeen, they’re both shop girls, working at Woolworths.

As they go out in the world in pursuit of love and happiness, the simplicity of their childhood dissolves as life becomes more complicated. The heady excitement of first love will consume them both, but the pain of unintentional betrayal will test their friendship in ways neither of them could ever imagine…

The Girl you Lost by Kathryn Croft. The latest title from the author of the bestselling The Girl with no past. Due for publication on 5th Feb and downloaded as a review copy from NetGalley.

Eighteen years ago, Simone Porter’s six-month-old daughter, Helena, was abducted. Simone and husband, Matt, have slowly rebuilt their shattered lives, but the pain at losing their child has never left them.

Then a young woman, Grace, appears out of the blue and tells Simone she has information about her stolen baby. But just who is Grace – and can Simone trust her?

When Grace herself disappears, Simone becomes embroiled in a desperate search for her daughter and the woman who has vital clues about her whereabouts.

Simone is inching closer to the truth but it’ll take her into dangerous and disturbing territory.

Simone lost her baby. Will she lose her life trying to find her?

Dance of Death by Edward Marston. Thanks to Allison and Busby for this one as I won it in one of their Advent Calendar draws.

Autumn, 1916. The first Zeppelin to be shot down by a British plane bursts into flames over London and plummets to the ground. Whilst those brave enough to remain outside during the air raid gaze in awe at the spectacular display, a killer takes advantage of their distraction during the blackout.

The following morning a renowned ballroom dancer is found brutally butchered in an alleyway. As Detective Inspector Harvey Marmion and Sergeant Joe Keedy build a picture of the victim’s promiscuous lifestyle and the ruthless competition of the dancing world, the number of potential suspects multiplies.

Wounded young men start returning from the front line and among them is Marmion’s own injured son, Paul. The detective inspector is forced to juggle his enigmatic murder investigation with tensions simmering at home; will he and Sergeant Keedy catch the killer before the gruesome nature of the dancer’s death gets out and panic spreads? 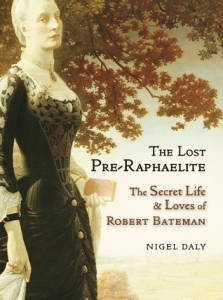 The Lost Pre-Raphaelite by Nigel Daly. A very well received Christmas present to finish off my new books this week.

When the author bought a falling down fortified house on the Staffordshire moorlands, he had no reason to anticipate the astonishing tale that would unfold as it was restored. A mysterious set of relationships emerged amongst its former owners, revolving round the almost forgotten artist, Robert Bateman, a prominent Pre-Raphaelite and friend of Burne Jones. He was to marry the granddaughter of the Earl of Carlisle, and to be associated with Benjamin Disraeli, William Gladstone, and other prominent political and artistic figures.

But he had abandoned his life as an artist in mid-career to live as a recluse, and his rich and glamorous wife-to-be had married the local vicar, already in his sixties and shortly to die. The discovery of two clearly autobiographical paintings led to an utterly absorbing forensic investigation into Bateman’s life.

The story moves from Staffordshire to Lahore, to Canada, Wyoming, and then, via Buffalo Bill, to Peru and back to England. It leads to the improbable respectability of Imperial Tobacco in Bristol, and then, less respectably, to a car park in Stoke-on-Trent. En route the author pieces together an astonishing and deeply moving story of love and loss, of art and politics, of morality and hypocrisy, of family secrets concealed but never quite completely obscured. The result is a page-turning combination of detective story and tale of human frailty, endeavor, and love. It is also a portrait of a significant artist, a reassessment of whose work is long overdue.