Amy Snow by Tracy Rees. Swayed by glut of reviews over Christmas in various book forums. As it appeared for Kindle at 99p it seemed worth a download.

Abandoned on a bank of snow as a baby, Amy is taken in at nearby Hatville Court. But the masters and servants of the grand estate prove cold and unwelcoming. Amy’s only friend and ally is the sparkling young heiress Aurelia Vennaway. So when Aurelia tragically dies young, Amy is devastated. But Aurelia leaves Amy one last gift. A bundle of letters with a coded key. A treasure hunt that only Amy can follow.
A life-changing discovery awaits . . . if only she can unlock the secret. 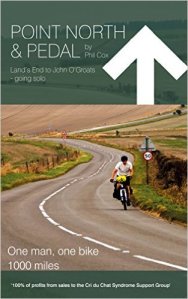 Point North & Pedal by Phil Cox. I have a penchant for cycling books having come to cycling late in life. Having never ridden a bike since I was 12 I was persuaded by a friend that we should undertake a charity bike ride. At this stage I was 47! However, after a lot of training and swearing. amazing we cycled 300 miles across Rajasthan, India. This was an experience I shall never forget, but have no desire to repeat. Consequently I am quite happy to read about someone else’s hard work, pain and suffering from the comfort of my armchair. Amazingly this was a free offering from Amazon for Kindle.

Born out of the need to do something competitive which didn’t aggravate his ruined knees, Phil took up cycling in 2008. In 2010, at the age of 39, a health issue drove him to focus more on fitness; cycling became a key part of his training regime.

A chance meeting at work first sparked the idea to achieve a life’s ambition, namely tocycle from Land’s End to John O’Groats and raise money for a small disability support group.The planning and training was the simple bit but did he have sufficient mental strength to cope with being on the road for 12 days alone?
The book is a great resource for those looking to make this classic End to End journey, lots of tips and hints to make the experience enjoyable and achievable.

The book recounts his journey and the surprising encounters along the way; it also contains anecdotes from Phil’s past and describes his fundraising attempts prior to the ride.

As the mileage mounts, there is a developing theme of people’s willingness to help and contribute. Social media provides essential support from his family and friends adding a humorous element. 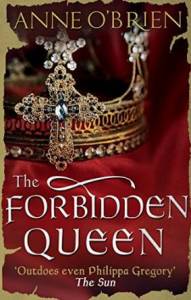 Forbidden Queen by Anne O’Brien, This is the story of Katherine de Valois. The forbidden queen who launched the most famous dynasty of all time… Another great Amazon Kindle freebie.

An innocent pawn. A kingdom without a King. A new dynasty will reign… 1415.

The jewel in the French crown, Katherine de Valois, is waiting under lock and key for King Henry V. While he’s been slaughtering her kinsmen in Agincourt, Katherine has been praying for marriage to save her from her misery. But the brutal King wants her crown, not her innocent love.

For Katherine, England is a lion’s den of greed, avarice and mistrust. And when Katherine is widowed at twenty-one she is a prize ripe for the taking. Her young son the future monarch, her hand in marriage worth a kingdom. This is a deadly political game; one the Dowager Queen must learn fast.

The players – Duke of Gloucester, Edmund Beaufort and Owen Tudor – are circling. Who will have her? Who will ruin her? 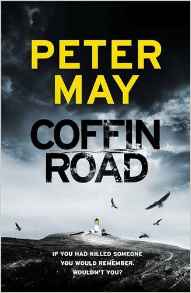 Coffin Road by Peter May and a welcome return to the Hebrides. Many thanks to Real Readers for this review copy. Due for publication 14 Jan.

A man is washed up on a deserted beach on the Hebridean Isle of Harris, barely alive and borderline hypothermic. He has no idea who he is or how he got there. The only clue to his identity is a map tracing a track called the Coffin Road. He does not know where it will lead him, but filled with dread, fear and uncertainty he knows he must follow it.

A detective crosses rough Atlantic seas to a remote rock twenty miles west of the Outer Hebrides of Scotland. With a sense of foreboding he steps ashore where three lighthouse keepers disappeared more than a century before – a mystery that remains unsolved. But now there is a new mystery – a man found bludgeoned to death on that same rock, and DS George Gunn must find out who did it and why.

A teenage girl lies in her Edinburgh bedroom, desperate to discover the truth about her father’s death. Two years after the discovery of the pioneering scientist’s suicide note, Karen Fleming still cannot accept that he would wilfully abandon her. And the more she discovers about the nature of his research, the more she suspects that others were behind his disappearance.

Coffin Road follows three perilous journeys towards one shocking truth – and the realisation that ignorance can kill us. 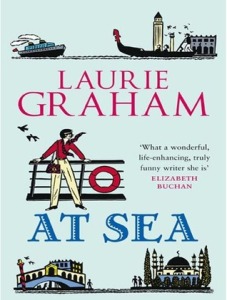 At Sea by Laurie Graham. This has been sitting on my wishlist for quite a while and this weekend it appeared in my local charity shop. A pristine unread copy  for 20p.

When Lady Enid – a woman in need of a project and a husband – throws in her lot with dashing Bernard Finch, she thinks she’s found her perfect life’s companion. Handsome and clever, Bernard has come a long way from his small-town American roots. Now he is a man transformed, more English than the English, a celebrated lecturer on Aegean cruises. Which is where his past comes back to bite him, in the shape of his old college chum, Frankie Gleeson.

Frankie has made his fortune in corn snacks and to celebrate his success he brings his wife, Nola, to cruise the Greek islands. Frankie is a simple man but he has the gift of total recall, of every detail of Bernard’s early years. Yet while Bernard shuns his cruise companions, Enid finds herself strangely drawn to them.

It’s amazing how much can happen between Istanbul and Venice.

The Painter’s Apprentice by Charlotte Betts. Another charity shop find for 20p

1688. Beth Ambrose has led a sheltered life within Merryfields, her family home on the outskirts of London; a place where her parents provide a sanctuary for melancholic souls. A passionate and gifted artist, Beth shares a close bond with Johannes the painter, who nurtures her talents and takes her on as his apprentice.

But as political tensions begin to rise in the capital, Noah Leyton arrives at her family home in the middle of the night with a proposition that turns Beth’s world upside down. And when Merryfields becomes refuge to a mysterious new guest, whose connections provide an opportunity for Beth to fulfil her artistic ambitions, she soon realises that it comes at a price . . .

Daughter of Time by Josephine Tey. A classic mystery much beloved by Ricardians. I read this years ago, but never had my own copy until now. Another charity shop bargain at 10p.

Richard III reigned for only two years, and for centuries he was villified as the hunch-backed wicked uncle, murderer of the princes in the Tower. Josephine Tey’s novel The Daughter of Time is an investigation into the real facts behind the last Plantagenet king’s reign, and an attempt to right what many believe to be the terrible injustice done to him by the Tudor dynasty.

Inspector Alan Grant of Scotland Yard, recuperating from a broken leg, becomes fascinated with a contemporary portrait of Richard III that bears no resemblance to the Wicked Uncle of history. Could such a sensitive, noble face actually belong to one of the world’s most heinous villains – a venomous hunchback who may have killed his brother’s children to make his crown secure? Or could Richard have been the victim, turned into a monster by the the Tudors?

Grant determines to find out once and for all, with the help of the British Museum and an American scholar, what kind of man Richard III really was and who killed the Princes in the Tower. 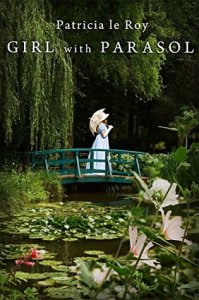 Girl with Parasol is a suspenseful novel about looting of Jewish-owned artworks by the Nazis during World War II. These crimes recently hit the headlines with the discovery of an art cache in Munich in 2013, and the release of George Clooney’s film “The Monuments Men” in 2014. “Girl with Parasol” is the name of a portrait painted by Monet in 1905. It shows a girl with a white parasol standing on a bridge above a lily pond. The model was the daughter of Monet’s art dealer, Tania Wertheimer. When the Germans invade France in 1940, Tania’s daughter Corinne keeps the painting hidden. The Nazis expropriate the family gallery and confiscate the stock. Corinne turns for help to her friend Rose, who is a curator at the Musée du Jeu de Paume. The Nazis use the Jeu de Paume as a transit point for artworks looted from the Jews. Rose is the sole French curator allowed to remain. She spies on the Germans and risks her life to pass details of mass-scale looting to the Resistance. In 1941, Corinne meets Thomas, a German diplomat. Thomas is handsome, entertaining, and openly sceptical of the Nazis. At first she resists his advances, but they begin an affair, and start to fall in love. And then Foreign Minister Ribbentrop announces he wants a Monet portrait, word gets out that Corinne owns “Girl with Parasol”, and Thomas is pressured to get hold of the painting. Trapped, desperate and panicking, he triggers a chain of events that will lead to disaster.

Katherine of Aragon: The True Queen by Alison Weir. This is the first in her Six Tudor Queens series and was a surprise addition to my book shelves. It appeared in the post with no notification as to who sent it or why. After a bit of digging I think it was via Caboodle as they were offering 100 free copies to entrants in December. Hardback is published in May.

A Spanish princess. Raised to be modest, obedient and devout. Destined to be an English Queen.

Six weeks from home across treacherous seas, everything is different: the language, the food, the weather. And for her there is no comfort in any of it. At sixteen years-old, Catalina is alone among strangers.

She misses her mother. She mourns her lost brother.
She cannot trust even those assigned to her protection.

KATHERINE OF ARAGON. The first of Henry’s Queens. Her story.

Acclaimed, bestselling historian Alison Weir has based her enthralling account of Henry VIII’s first wife on extensive research and new theories. She reveals a strong, spirited woman determined to fight for her rights and the rightful place of her daughter. A woman who believed that to be the wife of a King was her destiny.