A good (or maybe that should be bad) week this week, for review copies, thankfully not due imminently.

Daisy in Chains by Sharon Bolton. Review copy via NetGalley, due for publication 2 June.

Hamish Wolfe is no different. Locked up for the rest of his life for the abduction and murder of three young women, he gets countless adoring letters every day. He’s handsome, charismatic and very persuasive. His admirers are convinced he’s innocent, and that he’s the man of their dreams.

Who would join such a club?

Maggie Rose is different. Reclusive and enigmatic; a successful lawyer and bestselling true-crime writer, she only takes on cases that she can win.

Hamish wants her as his lawyer, he wants her to change his fate. She thinks she’s immune to the charms of a man like this. But maybe not this time . . . 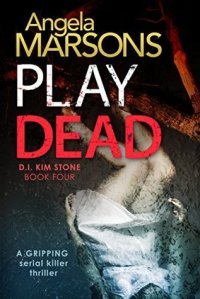 Play Dead by Angela Marsons. Book 4 in the fabulous D.I. Kim Stone series. Review copy via NetGalley due for publication 20 May
Description

The dead don’t tell secrets… unless you listen.

The girl’s smashed-in face stared unseeing up to the blue sky, soil spilling out of her mouth. A hundred flies hovered above the bloodied mess.Westerley research facility is not for the faint-hearted. A ‘body farm’ investigating human decomposition, its inhabitants are corpses in various states of decay. But when Detective Kim Stone and her team discover the fresh body of a young woman, it seems a killer has discovered the perfect cover to bury their crime. Then a second girl is attacked and left for dead, her body drugged and mouth filled with soil. It’s clear to Stone and the team that a serial killer is at work – but just how many bodies will they uncover? And who is next? As local reporter, Tracy Frost, disappears, the stakes are raised. The past seems to hold the key to the killer’s secrets – but can Kim uncover the truth before a twisted, damaged mind claims another victim …?

The Second Love of my Life by Victoria Walters. I keep reading good things about this so requested a copy via Bookbridgr which arrived yesterday

In the Cornish town of Talting, everyone is famous for something.

Until recently Rose was known for many things: her infectious positivity; her unique artistic talent; and her devotion to childhood sweetheart Lucas.

But two years ago that changed in one unthinkable moment. Now, Rose is known for being the young woman who became a widow aged just twenty-four.

Though Rose knows that life must go on, the thought of carving out a new future for herself is one she can barely entertain. Until a newcomer, Robert, arrives in Talting for the summer…

Can Rose allow herself the chance to love again?

The Museum of You by Carys Bray. A book that hadn’t crossed by radar until I was tempted by my book twin to take a look – Thanks Nicola. Luckily a Read Now on NetGalley when I took a look so no waiting. Due for publication 16 June.

Clover Quinn was a surprise. She used to imagine she was the good kind, now she’s not sure. She’d like to ask Dad about it, but growing up in the saddest chapter of someone else’s story is difficult. She tries not to skate on the thin ice of his memories.

Darren has done his best. He’s studied his daughter like a seismologist on the lookout for waves and surrounded her with everything she might want – everything he can think of, at least – to be happy.

What Clover wants is answers. This summer, she thinks she can find them in the second bedroom, which is full of her mother’s belongings. Volume isn’t important, what she is looking for is essence; the undiluted bits: a collection of things that will tell the full story of her mother, her father and who she is going to be.

But what you find depends on what you’re searching for.

Die of Shame by Mark Billingham. One of my favourite authors and another review copy via NetGalley. UK edition due 5 May.

Every Monday evening, six people gather in a smart North London house to talk about addiction. There they share their deepest secrets: stories of lies, regret, and above all, shame.

Then one of them is killed – and it’s clear one of the circle was responsible.

Detective Inspector Nicola Tanner quickly finds her investigation hampered by the strict confidentiality that binds these people and their therapist together. So what could be shameful enough to cost someone their life?

And how do you find the truth when denial and deception are second nature to all of your suspects? 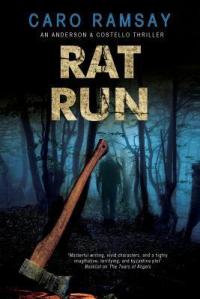 Rat Run by Caro Ramsay. Another outing for Anderson and Costello. Final review copy via NetGalley, hardback due for publication in UK 30 April.

A macabre discovery throws disturbing new light on a 20-year-old murder case in the latest tense and twisting Anderson and Costello mystery. In August 1992, a young mother and her two small sons were brutally murdered in the woods behind their home. Her neighbour Andrew Gyle was convicted of the crime and sentenced to life imprisonment. Now, twenty-three years later, a macabre discovery throws new light on the case. Could there have been a shocking miscarriage of justice? Having only just returned to work following an enforced leave of absence, DCI Colin Anderson knows he must make a success of his comeback case. But, as he and his partner, DI Costello, uncover serious discrepancies in the original investigation, it becomes clear that not everyone is telling them the truth. Meanwhile, Costello worries that Anderson is struggling to cope – and his increasingly odd behaviour causes her to begin to think the unthinkable: can she trust her own partner?

Only a couple of purchases this week:- 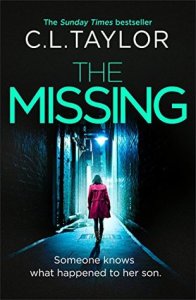 The Missing by C L Taylor. One of the talked about books since its publication on 7 April and the Kindle edition was available for 99p

When fifteen-year-old Billy Wilkinson goes missing in the middle of the night, his mother, Claire, blames herself. She’s not the only one. There isn’t a single member of Billy’s family that doesn’t feel guilty. But the Wilkinsons are so used to keeping secrets from one another that it isn’t until six months later, after an appeal for information goes horribly wrong, that the truth begins to surface.

Claire is sure of two things – that Billy is still alive and that her friends and family had nothing to do with his disappearance.

A mother’s instinct is never wrong. Or is it? 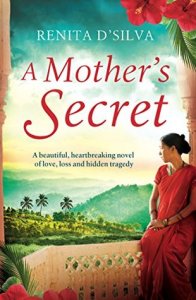 A Mother’s Secret by Renita D’Silva. Another much talked about book available on Kindle for 99p.

What if you discovered that everything you knew about yourself was a lie?

When pregnant Jaya loses her mother, then her baby son Arun in a tragic cot death, her world crashes down. Overcome by grief and guilt, she begins to search for answers – to the enigma of her lonely, distant mother, and her mysterious past in India.

Looking through her mother’s belongings, she finds two diaries and old photographs, carrying the smoky aroma of fire. A young boy smiles out at Jaya from every photograph – and in one, a family stand proudly in front of a sprawling mansion. Who is this child? And why did her mother treasure this memento of a regal family lost to the past?

As Jaya starts to read the diaries, their secrets lead her back to India, to the ruin of a once grand house on a hill. There, Kali, a mad old lady, will unlock the story of a devastating lie and a fire that tore a family apart.

Nothing though will prepare Jaya for the house’s final revelation, which will change everything Jaya knew about herself.

Finally a roundup of this week’s Kindle freebies 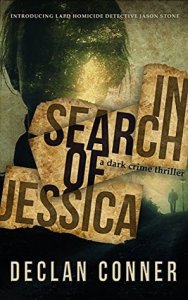 In Search of Jessica by Declan Conner