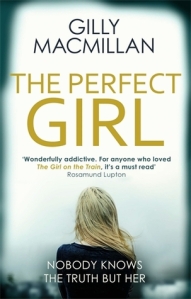 The Perfect Girl by Gilly Macmillan. Review copy via NetGalley to coincide with paperback publication in August. Kindle edition is already available

To everyone who knows her now, Zoe Maisey – child genius, musical sensation – is perfect. Yet several years ago Zoe caused the death of three teenagers. She served her time, and now she’s free.

Her story begins with her giving the performance of her life.

By midnight, her mother is dead.

The Perfect Girl is an intricate exploration into the mind of a teenager burdened by brilliance, and a past that she cannot leave behind.

The Hendersons by Daphne Glazer. A Read Now from NetGalley and suggested by one of my online tempters (thank you Nicola Smith). Due for publication on 29th July.

The Hendersons opens in 1914 just before the outbreak of World War I and concludes in 1919. It follows the lives of the eponymous Henderson family: William, a Sheffield barber, his wife, Lydia, and his four children, Matthew, Joe, Bob and Amy. William being a fervent churchman, lay preacher and pacifist, opposes the church’s call to arms and he and the rest of the family find themselves in a different kind of war, one which appears to have no end.

This is Where I Am by Karen Campbell. One from Sainsbury’s 90 books for 90p promotion.

When recently widowed Deborah Maxwell is assigned by the Scottish Refugee Council to act as mentor to Abdi Hassan, a Somali refugee, the two are drawn into an awkward friendship. They must spend a year together, meeting once a month in different parts of Glasgow. As recently-widowed Deborah opens Abdi’s eyes to her beloved city and its people, he teaches her about the importance of family – and of laying your ghosts to rest. All Abdi has brought with him is his four-year-old daughter, Rebecca, who lives in a silence no one can reach. Until, one day, she starts talking. And they discover why she had stopped…

Set during the years of the British Raj, Umi Sinha’s unforgettable debut novel is a compelling and finely wrought epic of love and loss, race and ethnicity, homeland – and belonging. Lila Langdon is twelve years old when she witnesses a family tragedy after her mother unveils her father’s surprise birthday present – a tragedy that ends her childhood in India and precipitates a new life in Sussex with her Great-aunt Wilhelmina. From the darkest days of the British Raj through to the aftermath of the First World War, BELONGING tells the interwoven story of three generations and their struggles to understand and free themselves from a troubled history steeped in colonial violence. It is a novel of secrets that unwind through Lila’s story, through her grandmother’s letters home from India and the diaries kept by her father, Henry, as he puzzles over the enigma of his birth and his stormy marriage to the mysterious Rebecca.

My Husband’s Wives by Faith Hogan. Kindle bargain at 90p

One man, three wives, too many secrets. A heart-warming story of love, loss, family and friendship. A compelling debut that fans of Freya North will love.

Paul Starr, Ireland’s leading cardiologist dies in a car crash with a pregnant young women by his side.

United in their grief and the love of one man, four women are thrown together in an attempt to come to terms with life after Paul. They soon realise they never really knew him at all.

The love they shared for Paul in his life and which incensed a feeling of mistrust and dislike for each other, in his death turns into the very thing that bonds them and their children to each other, forever.

As they begin to form unlikely friendships, Paul’s death proves to be the catalyst that enables them to become the people they always wanted to be.

In 1964 Maggie wakes to find herself in a psychiatric ward, not knowing who she is or why she has been committed. She slowly begins to have memories of a storm and of a man called Jack and slowly the pieces of the past begin to come together…

In 2008 Jonathan is struggling to put his differences with his parents aside to tell them he and his wife are expecting a baby, when a detective arrives to question him about crimes committed long ago…

And as these two tales interweave, the secrets of the past, long kept hidden, start to come to light in unexpected and sometimes startling ways.

The Things We Never Said is a powerful novel about fatherhood and motherhood; nature and nurture; cruelty and kindness; and mental breakdown. Written in beautiful, compelling prose, it is by turns revealing, witty and moving.

Secrets of the Sewing Bee by Kate Thompson. Another 99p Kindle bargain

Orphan Flossy Brown arrives at Trout’s garment factory in Bethnal Green amidst the uncertainty of the Second World War. In 1940s London, each cobbled street is strewn with ghosts of soldiers past, all struggling to make ends meet. For the women of the East End, their battles are on the home front.

Flossy is quickly embraced by the colourful mix of characters working at Trout’s, who have turned their sewing expertise to vital war work. They fast become the family that Flossy has always longed for. Dolly Doolaney, darling of the East End, and infamous tea lady, gives her a particularly warm welcome and helps Flossy settle into wartime life.

Things aren’t so easy for Peggy Piper, another new recruit at the factory. She’s used to the high life working as a nippie in the West End, and is not best pleased to find herself bent over a sewing machine. But war has the ability to break down all sorts of class barriers and soon Peggy finds the generosity and spirit of her fellow workers difficult to resist.

Dolly sets up a sewing circle and the ladies at Trout’s play their part in defending the frontline as they arm themselves with their needles and set about stitching their way to victory. But as the full force of the Blitz hits London, the sewing bee are forced to shelter in the underground tube stations on a nightly basis.

In such close quarters, can Dolly manage to contain the secret that binds them all? And how will Peggy and Flossy cope as their lives are shaped and moved by forces outside of their control? 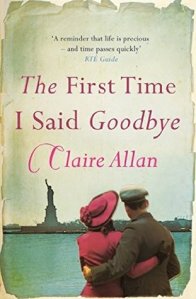 Would you hold on tighter if you knew you were saying goodbye forever?

In 1959, factory girl Stella Hegarty finds herself falling unexpectedly for the charms of a handsome US marine based in Derry.Caught up in a whirlwind of romance, Stella finds herself planning a new life in America with her beloved Ray.But when tragedy steps in, both their lives are thrown into turmoil and they come to realise they may have said their first, and last goodbye.

In 2010, Annabel Jackson, reeling from the loss of her father, agrees to accompany her mother Stella back to Ireland to meet her family for the first time. In Derry they both start to realise that sometimes you have to say goodbye to what you thought you always wanted, in order to find what you have needed all along.

For everyone dreaming of escaping to the country, fall in love this summer at Skylark Farm…

Amber is a city girl at heart. So when her boyfriend Jake Somerville suggests they move to the countryside to help out at his family farm, she doesn’t quite know how to react. But work has been hectic and she needs a break so she decides to grasp the opportunity and make the best of it.

Dreaming of organic orchards, paddling in streams and frolicking in fields, Amber packs up her things and moves to Skylark Farm. But life is not quite how she imagined – it’s cold and dirty and the farm buildings are dilapidated and crumbling.

But Amber is determined to make the best of it and throws herself into farm life. But can she really fit in here? And can she and Jake stay together when they are so different?

A story of love in the countryside from the author of the bestselling The Cherry Tree Café. Perfect for Escape to the Country dreamers, Cath Kidston fans and Country Living addicts! 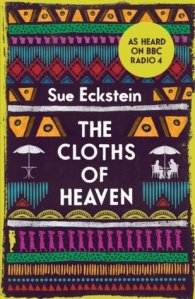 The Cloths of Heaven by Sue Eckstein. A Kindle impulse buy at 99p based on initially on the cover and the fact that it references on of my favourite poems by WB Yeats.

In this assured debut about loneliness and passion in Africa, Sue Eckstein enthrals with a deliciously intricate plot, compelling characters and razor-sharp dialogue.West Africa in the early 1990s. Isabel Redmond is tiring of her iconoclastic husband’s penchant for pendulous black breasts; the High Commissioner and his wife Fenella are both enjoying illicit affairs; an old English judge is wandering through the scrub following a tribe of Fulani herdsmen; Bob Newpin is about to make a killing in timeshares; and just what Father Seamus is up to is anyone’s guess.Enter new diplomat Daniel Maddison on his first posting abroad. Rebelling against the endless rounds of cocktail parties, golf and gossip, he finds himself drawn to people and places that lie way beyond the experience of his High Commission colleagues — and specifically to the dusty warehouse in the heart of the city where a thin white woman is silently measuring out lengths of brightly coloured cloth. 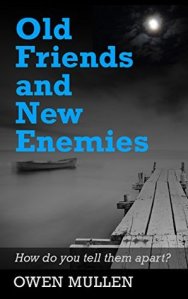 The body on the mortuary slab wasn’t who Glasgow PI Charlie Cameron was looking for. But it wasn’t a stranger. Ian Selkirk had been stabbed through the heart and dumped in the loch.
Suddenly, a routine missing persons investigation becomes a fight for survival as Charlie goes up against a notorious Glasgow gangster. Jimmy Rafferty is ruthless. Even his own family are terrified of him. He wants to use Charlie to get something for him. And Jimmy Rafferty always gets what he wants.
Only one problem.
Charlie doesn’t know where it is.