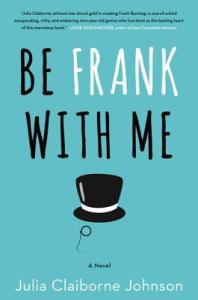 Be Frank with Me by Julia Claiborne Johnson. Thanks to Corvus for this review copy.

Meet Frank – a modern nine-year-old boy with the wit of Noel Coward and the wardrobe of a 1930s movie star.

Meet Mimi Banning – reclusive literary legend and mother to Frank. Mimi has been holed up in her Bel Air mansion for years, keeping her secrets, hiding from the world. Until Alice.

Meet Alice – a level-headed young woman who finds herself thrust into the Banning household, charged with looking after Mimi’s unusual son. Alice doesn’t want mysteries, she doesn’t want eccentricity and she certainly doesn’t want a love-affair. But she finds all of them under the Banning roof. In so doing, she discovers a part of herself she never knew was missing.

Full of heart and humour, Be Frank With Me is a captivating and unconventional story of an unusual mother and son, and the intrepid young woman who finds herself irresistibly pulled into their unforgettable world. 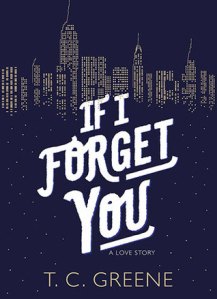 If I Forget You by T.C. Greene. More thanks to Corvus for this.

When Margot and Henry meet, they fall deeply in love.

And then they lose each other.

But Henry can’t forget Margot and Margot is haunted by her memories of Henry. They live in each other’s minds.

Twenty-one years later, they meet, by chance, on a Manhattan street. And that’s where their story truly begins…

If I Forget You is a beautiful exploration of what it means to find the person you are destined to be with, but then spend a lifetime apart. 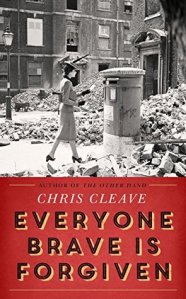 Everyone Brave is Forgiven by Chris Cleave. Have read so many good things abut this book, so thanks to NetGalley for this.

When war is declared, Mary North leaves finishing school unfinished, goes straight to the War Office, and signs up.

Tom Shaw decides to give it a miss – until his flatmate Alistair unexpectedly enlists, and the conflict can no longer be avoided.

Young, bright and brave, Mary is certain she’d be a marvelous spy. When she is – bewilderingly – made a teacher, she instead finds herself defying prejudice to protect the children her country would rather forget.

Tom, meanwhile, finds that he will do anything for Mary.

And when Mary and Alistair meet, it is love, as well as war, that will test them in ways they could not have imagined, entangling three lives in violence and passion, friendship and deception, inexorably shaping their hopes and dreams.

In a powerful combination of both humour and heartbreak, this dazzling novel weaves little-known history, and a perfect love story, through the vast sweep of the Second World War – daring us to understand that, against the great theatre of world events, it is the intimate losses, the small battles, the daily human triumphs, that change us most.

Rose leaves her Cornwall café to search for her daughter in the sweltering slums of Kolkata, India.

In the daily struggle for survival, she is often brought to her knees, but finds strength to overcome the poverty and disease, grows to love the Dalit community she helps.

But then there are deaths, and she fears for her own safety.

Her café at home is at risk of being torched, and finally, she has to make the terrible choice between her daughter and the Indian children.

Death Do Us Part by Steven Dunne. 99p

Even death cannot part these couples . . .

DI Damen Brook is on a rare period of leave and determined to make the most of it by re-connecting with his daughter Terri. But with her heavy drinking proving a challenge, Brook takes the opportunity to visit a local murder scene when his help is requested.

An elderly couple have each been executed with a single shot to the heart and the method echoes that of a middle-aged gay couple killed the previous month.

With the same killer suspected and the officer currently in charge nearing retirement, Brook knows that he has little choice but to cut short his leave when forced by his superiors to take the lead on the case.
Brook believes that he can catch this ruthless killer, but already distracted by Terri’s problems, is he about to make a fatal mistake and lead the killer right to his own door?

Ruby is a vlogger, a rising star of YouTube and a heroine to millions of teenage girls.

But she’s an adult – nothing to worry about, surely?

Ruby, in the dirt, pleading for her life.

Enter Detective Inspector Kate Riley; the Met’s rising star and the head of a new team of investigators with the best resources money can buy. Among them, Detective Sergeant Zain Harris, the poster boy for multiracial policing. But can Kate wholly trust him – and more importantly, can she trust herself around him?

As hysteria builds amongst the press and Ruby’s millions of fans, Kate and her team are under pressure to get results, and fast, but as they soon discover, the world of YouTube vloggers and social media is much darker than anyone could have imagined.

‘Margaret, I have to tell you. There was a curse.’ Elizabeth, my cousin, puts her hand in mine and I can feel her tremble.

‘It was that whoever took my brothers from the Tower, whoever put my brothers to death should die for it.’

From the Number One bestselling author of THE WHITE QUEENcomes the riveting story of Margaret Pole, cousin of Elizabeth of York, and her unique view of Henry VIII’s terrifying rise to power in Tudor England.

As an heir to the Plantagenets, Margaret is seen by the King’s mother (THE RED QUEEN) as a powerful threat to the Tudor claim to the throne. She is buried in marriage to a Tudor supporter – Sir Richard Pole, governor of Wales – and becomes guardian to Arthur, the young Prince of Wales, and his beautiful bride, Katherine of Aragon.

But Margaret’s destiny, as cousin to the queen (THE WHITE PRINCESS), is not for a life in the shadows. Tragedy throws her into poverty and only a royal death restores her to her place at young Henry VIII’s court where she becomes chief lady-in-waiting to Queen Katherine. There she watches the dominance of the Spanish queen over her husband and her tragic decline.

Amid the rapid deterioration of the Tudor court, Margaret must choose whether her allegiance is to the increasingly tyrannical Henry VIII or to her beloved queen. Caught between the old and the new, Margaret must find her own way, concealing deep within her the knowledge that an old curse cast upon all the Tudors is slowly coming true…

Think you know Charlotte, Emily & Anne? Think again. Samantha Whipple is the last remaining descendent of the illustrious Brontë family, of Wuthering Heights and Jane Eyre fame. After losing her father, a brilliant author in his own right, it is up to Samantha to piece together the mysterious family inheritance lurking somewhere in her past – yet the only clues she has at her disposal are the Brontë’s own novels. With the aid of her handsome but inscrutable Oxford tutor, Samantha must repurpose the tools of literature to unearth an untold family legacy, and in the process, finds herself face to face with what may be literature’s greatest secret.

Once a week, Rosie Tipcott counts her blessings.

She goes to sit on her favourite bench on the north Devon cliffs, and thanks her lucky stars for her wonderful husband, her mischievous young daughters, and her neat little house by the sea. She vows to dedicate every waking hour to making her family happy.

But then her husband unexpectedly leaves her for another woman and takes the children. Now she must ask the question: what is left in her life? Can Rosie find the strength to rebuild herself? More importantly, does she even want to?

The Last Resort by Sam Maxfield

Mothers and Daughters by Minna Howard

You are My Sunshine by Roberta Kagan

The Girl Who Tweeted Wolf by Nick Bryan

I Hate That You Bloody Left me by Heather Hill

A Recipe for Romance by Elizabeth Hilton