Be Frank With Me by Julia Claiborne Johnson – 5*s @JuliaClaiborneJ 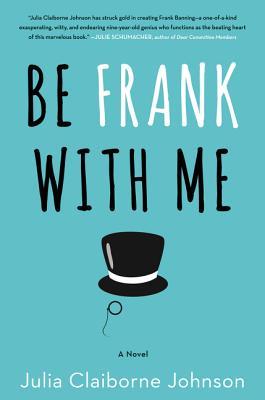 Reclusive literary legend M. M. “Mimi” Banning has been holed up in her Bel Air mansion for years, but now she’s writing her first book in decades and to ensure timely completion her publisher sends an assistant to monitor her progress. Mimi reluctantly complies—with a few stipulations: No Ivy Leaguers or English majors. Must drive, cook, tidy. Computer whiz. Good with kids. Quiet, discreet, sane.

When Alice Whitley arrives at the Banning mansion, she’s put to work right away—as a full-time companion to Frank, the writer’s eccentric nine-year-old, a boy with the wit of Noël Coward, the wardrobe of a 1930s movie star, and very little in common with his fellow fourth graders.

As she gets to know Frank, Alice becomes consumed with finding out who his father is, how his gorgeous “piano teacher and itinerant male role model” Xander fits into the Banning family equation—and whether Mimi will ever finish that book.

Full of heart and countless only-in-Hollywood moments, Be Frank With Me is a captivating and heartwarming story of an unusual mother and son, and the intrepid young woman who finds herself irresistibly pulled into their unforgettable world.

Originally rated 4.5 but having lived with Frank in my head over the weekend it’s a 5!

Be Frank With Me, in common with several other of my “best” reads this year, is quirky, clever and funny and yet contains an underlying vein of sadness and social comment on what it’s like to be different or accepted. What it also screams out is “Read Me”, because the characters are an oddball mix of troubled, eccentric, enthusiastic and sheer delight in the case of Frank. They are all memorable, with their own voices and foibles that we are allowed to intrude upon over the period of time that Alice is sent to “assist” Mimi Banning with the completion of her latest book.

Mimi’s first book became a modern classic, but she never published anything after that and decades later her publisher sends Alice to move things along when it becomes apparent that Mimi is writing again. What Alice unwittingly becomes is a focus for Mimi’s distrust of outsiders and do-gooders (not helped by Alice’s oft naive Pollyanna tendencies) and a surrogate mother, sister, friend and confidant to Frank, Mimi’s 9 year old son.

Frank is delightful, charming and heartbreaking in equal measure because, and in spite of, his exceptional intelligence, eccentricities and obsession with 1930’s Hollywood films and sartorial precision. Think Noel Coward meets Fred Astaire with a pinch of Stewie Griffin from the Family Guy (but without the violent, matricidal and evil streak). Essentially Frank is different and stands apart, his condition (if there is one) is never defined although he appears to reside somewhere on the autistic spectrum. What is apparent is that he has a clear, straightforward and very literal view of life. he can’t cope with nuances, humour, sarcasm or being touched and he has to be in control of his world as much as possible. While this may be problematic at times for his mother, for Alice and for his only male role model Xander, they all strive to make it not a problem for him, which is touching and heartwarming.

The story of Frank, Mimi, Xander and Mr Vargas (her boss) are all relayed by Alice, so maybe we could question her objectivity and reliability in relation to her narrative  as certain characters are not always portrayed sympathetically. But while we follow their journey’s and uncover their stories, we can also see a change in Alice who grows and adapts with situations and events that force her to re-assess how she sees things.

One the face of it, this is a fairly straightforward story but the characters are anything but, and that makes it a much more multi faceted tale of love, duty, friendship and acceptance, themes that we all identify with. But ultimately it is Frank that steals the show as well as your heart and he will stay in your memory as the “peacock in a barnyard full of chickens”.

I received a review copy of this book from the publisher Corvus Books in return for an honest review.

Available via Amazon.co.uk and Amazon.com