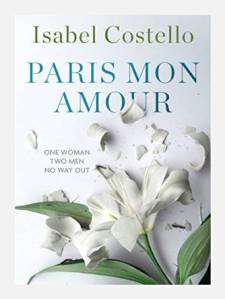 The first time I caused terrible harm to the people I love it was an accident. The second is the reason I’m here.

When Alexandra discovers that her husband Philippe is having an affair, she can’t believe he’d risk losing the love that has transformed both their lives.

Still in shock, Alexandra finds herself powerfully attracted to a much younger man. Jean-Luc Malavoine is twenty-three, intense and magnetic. He’s also the son of Philippe’s best friend.

With every increasingly passionate liaison, Alexandra is pulled deeper into a situation that threatens everyone she holds dear.

Beautifully told through the boulevards and arrondissements of the City of Light, Paris Mon Amour is a sensual novel about inescapable desire and devastating betrayals. It is the story of one woman and two men, and what happens when there is no way out.

I was initially drawn to this by the cover and when I then read the blurb, it sounded an intriguing read that raised a lot of questions. What was the accident in Alexandra’s past? What caused Philippe to have an affair and more specifically what was it about Jean-Luc that induced such powerful attraction. Well now I know the answers, and with regards to Alexandra’s affair, I didn’t feel the lure of the all encompassing passion that I expected. I felt that rather than Alexandra and Jean-Luc being drawn into an all consuming passion they were actually escaping their own damaged pasts. Would Alexandra have been so susceptible if she hadn’t discovered that her husband was having an affair of his own, would Jean-Luc have been so attracted if Alexandra wasn’t so wrong on so many levels. For me, I feel the answer was no and I just didn’t feel the ‘passion’ which I will admit influenced my view of the affair

As ever, though, these things are subjective and anyone else reading this may well feel differently, as other reviewers clearly do. What can’t be denied is that the book certainly captures the selfishness, guilt and recklessness that comes with embarking on an affair (not that I speak from experience – just in case my husband is reading this review). It paints a vivid picture of the social and cultural milieu that the characters inhabited, with the boulevards and arrondissements of Paris as the perfect backdrop.

I received a review ecopy of this book via NetGalley in return for an honest review.