A Rip in the Veil and In the Shadow of the Storm by Anna Belfrage. Thanks to Anna for these copies to review.

A Rip in the Veil

On a muggy August day in 2002 Alexandra Lind is inexplicably thrown several centuries backwards in time to 1658. Life will never be the same for Alex.

Alex lands at the feet of Matthew Graham – an escaped convict making his way home to Scotland. She gawks at this tall gaunt man with hazel eyes, dressed in what looks like rags. At first she thinks he might be some sort of hermit, an oddball, but she quickly realises that she is the odd one out, not him.

Catapulted from a life of modern comfort, Alex grapples with her frightening new existence. Potential compensation for this brutal shift in fate comes in the shape of Matthew – a man she should never have met, not when she was born three centuries after him. But Matthew comes with baggage of his own, and at times it seems his past will see them killed.

How will she ever get back? And more importantly, does she want to?

In the Shadow of the Storm

Adam de Guirande owes his lord, Sir Roger Mortimer, much more than loyalty. He owes Sir Roger for his life and all his worldly goods, he owes him for his beautiful wife – even if Kit is not quite the woman Sir Roger thinks she is. So when Sir Roger rises in rebellion against the king, Adam has no choice but to ride with him – no matter what the ultimate cost may be. England in 1321 is a confusing place. Edward II has been forced by his barons to exile his favourite, Hugh Despenser. The barons, led by the powerful Thomas of Lancaster, Roger Mortimer and Humphrey de Bohun, have reasons to believe they have finally tamed the king. But Edward is not about to take things lying down, and fate is a fickle mistress, favouring first one, then the other. Adam fears his lord has over-reached, but at present Adam has other matters to concern him, first and foremost his new wife, Katherine de Monmouth. His bride comes surrounded by rumours concerning her and the baron, and he hates it when his brother snickers and whispers of used goods. Kit de Courcy has the misfortune of being a perfect double of Katherine de Monmouth – which is why she finds herself coerced into wedding a man under a false name. What will Adam do when he finds out he has been duped? Domestic matters become irrelevant when the king sets out to punish his rebellious barons. The Welsh Marches explode into war, and soon Sir Roger and his men are fighting for their very lives. When hope splutters and dies, when death seems inevitable, it falls to Kit to save her man – if she can. ‘In the Shadow of the Storm’ is the first in Anna Belfrage’s new series,The King’s Greatest Enemy, the story of a man torn apart by his loyalties to his baron, his king, and his wife.

A gorgeous country house hotel, a liberal dusting of snow, a cosy weekend away…what more could Lizzie ask for at Christmas?

Every Christmas Lizzie promises herself that things will change and she will leap into the new year a new woman. And yet here she is again, at the beginning of December and nothing is different. Her girls have grown up and left home, her husband Henry is slumped in front of the TV and she is alone in the kitchen, seeking refuge in the cooking sherry and talking to her Gary Barlow calendar. She’s also been very diverted by handsome new neighbour Marcus and she knows she shouldn’t be …

So when best friend Ann suggests a weekend away in the country, Lizzie jumps at the chance. Will this Christmas escape give Lizzie some much needed perspective and allow her to mend her marriage? Or will Marcus prove to be too much of a distraction? 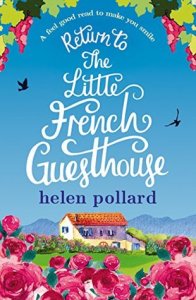 Return to the Little French Guesthouse by Helen Pollard. Courtesy of NetGalley

Blue skies, new love, and a glass of Bordeaux . . . what could possibly go wrong?

When Emmy Jamieson leaves her life behind and moves to La Cour des Roses, a gorgeous guesthouse amidst vineyards in France, everything is resting on her success as the new guesthouse manager.

Looming in the calendar is the biggest booking ever, when the entire eccentric, demanding Thomson family will descend for a golden wedding anniversary. With airbeds on the floor and caravans in the garden, La Cour des Roses will be bursting at the seams.

Emmy knows she’s up to the challenge, especially with the support of the gorgeous Alain, the half-French, half-English, caramel-eyed accountant. But she hadn’t counted on a naked, sleepwalking travel blogger, or the return of owner Rupert’s venomous ex-wife Gloria.

Gloria has a few things to say about Emmy’s new role, Rupert’s finances, and the unsuspecting Alain, which send everybody reeling. Just when Emmy can see a future for herself of endless sunshine, true love and laughter, are her dreams about to be ripped at the seams?

A Year and a Day by Isabelle Broom. Courtesy of NetGalley

For Megan, visiting Prague with her friend Ollie is just business. Nothing more. Because if she admits the truth she might lose everything.

For Hope, this trip is a surprise treat from Charlie, her new partner. But she’s struggling to enjoy the city when she knows how angry her daughter is. And that it’s all her fault.

For Sophie, Prague has always been magical. And now she’s counting down the moments until her boyfriend Robin joins her in the city that holds so many of their memories . . .

The Prodigal Daughter by Prue Leith. Courtesy of Quercus.

The second book in the Food of Love trilogy about an extended Anglo/Italian family in the ever-growing restaurant trade. Rebellious daughter, Angelica Angelotti, wants to strike out on her own away from the family. But some bad choices – including picking the wrong partner – lead to heart-wrenching consequences.

Angelica has grown up in the family restaurant business started by her Italian father, Giovanni, and his English wife, Laura. Surrounded by gorgeous Italian food, now she wants to try something different. Defying her father’s wishes, she moves to Paris to learn French cuisine. There, caught up in the excitement and emotion of the May ’68 student riots, she falls in love with a charismatic but unreliable man.

Back in London with him, Angelica’s future career blossoms at the Savoy Hotel and further develops when she becomes a food writer. What happens to her marriage is another matter and her parents’ concerns are proved painfully justified.

Moving back to run the inn on her family’s estate in Gloucestershire may feel like failure, but little does Angelica know that what awaits her there is the greatest challenge of her life – and a second chance at love.

The Night He Left by Sue Lawrence. 99p

At 7pm on 28th December 1879 a violent storm batters the newly-built iron rail bridge across the River Tay, close to the city of Dundee. Ann Craig, a wealthy woman, is waiting for her husband, a mill owner, to return home. From her window she sees the bridge collapse, the train he is travelling on ploughing into the sea, killing all those on board. As Ann investigates the events leading up to the crash, doubt is cast on whether Robert was on the train after all. If not, where is he, and who is the mysterious woman who is first to be washed ashore? In the present day, Fiona Craig’s new partner Pete, an Australian restaurateur, clears the couple’s bank account before abandoning his car at Dundee Airport and disappearing. When the Police discover his car is stolen, Fiona conducts her own investigation into Pete’s background, slowly uncovering dark secrets and strange parallels with the events of 1879. Following on from her acclaimed debut, Fields of Blue Flax, chef, food writer and TV presenter, Sue Lawrence, serves up another brilliant historical mystery, meticulously researched and densely plotted, with plenty of twists and turns and a gripping climax. 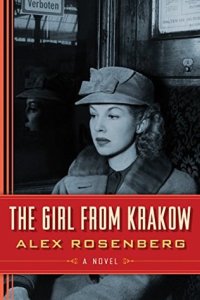 The Girl from Krakow by Alex Rosenberg. £1

It’s 1935. Rita Feuerstahl comes to the university in Krakow intent on enjoying her freedom. But life has other things in store—marriage, a love affair, a child, all in the shadows of the oncoming war. When the war arrives, Rita is armed with a secret so enormous that it could cost the Allies everything, even as it gives her the will to live. She must find a way both to keep her secret and to survive amid the chaos of Europe at war. Living by her wits among the Germans as their conquests turn to defeat, she seeks a way to prevent the inevitable doom of Nazism from making her one of its last victims. Can her passion and resolve outlast the most powerful evil that Europe has ever seen?

In an epic saga that spans from Paris in the ’30s and Spain’s Civil War to Moscow, Warsaw, and the heart of Nazi Germany, The Girl from Krakow follows one woman’s battle for survival as entire nations are torn apart, never to be the same. 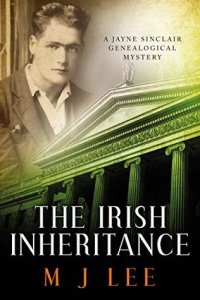 July 8, 1921. Ireland.
A British Officer is shot dead on a remote hillside south of Dublin.
November 22, 2015. United Kingdom.
Former police detective, Jayne Sinclair, now working as a genealogical investigator, receives a phone call from an adopted American billionaire asking her to discover the identity of his real father.
How are the two events linked?
Jayne Sinclair has only three clues to help her: a photocopied birth certificate, a stolen book and an old photograph. And it soon becomes apparent somebody else is on the trail of the mystery. A killer who will stop at nothing to prevent Jayne discovering the secret hidden in the past
The Irish Inheritance takes us through the Easter Rising of 1916 and the Irish War of Independence, combining a search for the truth of the past with all the tension of a modern-day thriller.
It is the first in a series of novels featuring Jayne Sinclair, genealogical detective. 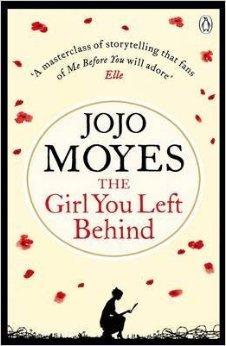 The Girl You Left Behind by Jo Jo Moyes

Distraction by A E Murphy

Death in the Valencian Dust by Caroline Angus Baker