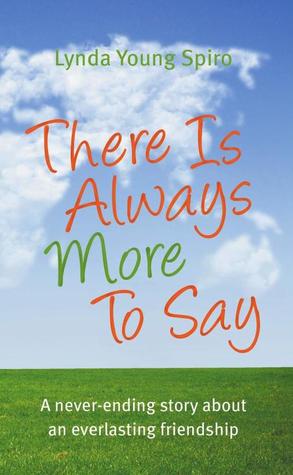 Soho 1984: Two people meet and their worlds are changed forever. An unexpected meeting – a look that means their lives will never be the same again. In “There Is Always More To Say”, Lynda Spiro chronicles the lives of the couple through friendships, marriage, fleeting moments and snatched time. It is a passionate account about a connection between two people that never dies even when tested by distance and when life throws the unexpected at their feet.

“The meeting of two personalities is like the contact of two chemical substances. If there is any reaction both are transformed.” C G Jung

I’m not really quite sure where to start with this review as this book is not a typical read, but that is not meant in a bad way. It’s a fairly short read, at times repetative (largely due to the nature of the story and the medium by which it unfolds) but it leaves a strong impact, because of the emotions it invokes and the way it makes you think.

It’s a simple story of a relationship that began back in London in the 1980’s. Two young people meet and feel a connection that goes beyond anything that either has felt before and yet one has just proposed to his partner and intends to go home to the USA to see it through. It is at this point that I realise we never know the names of the would be lovers/friends, although we know the names (though not necessarily the gender) of all the other characters.

The story as it unfolds is told from the female perspective, as over the years the contact is maintained mainly by letter, then email and with a brief personal meeting 10 years after their initial meeting. The literary style is almost stream of consciousness as the thoughts, feelings and emotions tumble out as to how she thinks and feels. How much of this is ever really revealed to the ‘friend’ is never clear. What is apparent to the reader though, is how real the emotions are that are invoked, and what an impact their ‘connection’ has had on her life. Despite having spent such a relatively short time together, this connection has sustained them over the years – or has it?

While the book is subtitled a never-ending story about an everlasting friendship and certainly is emotive and passionate, for me there is also an ambiguity and sadness about it. Whether that is intentional or just my reading of it I cannot say. While I love the idea of having a soul mate who understands, nurtures and supports and allows you to be you, or be the person you want to be. When that person is not your partner but someone elses and you have your own partner and family I think there is a selfishness to that relationship. It sets someone up on a pedestal and means your real relationships will never meet that ideal. If you are always keeping something back, how real is that everyday relationship, and how ‘real’ is the relationship with the soul mate.

Of course we only get one side of the story, and that is not neccesarily a reliable version. We never get too much back from the other side, could it be that the depth of the relationship is itself a fantasy.When we do hear from the ‘friend’ there is often  a more ambiguous tone.

Intersperses through out the book are inspirational quotes which cleverly magnify or complement the accompanying narrative, which further amplifies the often spiritual or questing spirit that I found within the book. This is clearly a book designed to make you think, about relationships, about the nature of love and loss, and about ourselves and what we want/need. However one ‘reads’ the narrative, it certainly contains some universal truths and thoughts which will strike a chord and make you think.

Thanks to Lynda for providing a copy of this book in return for an honest review.