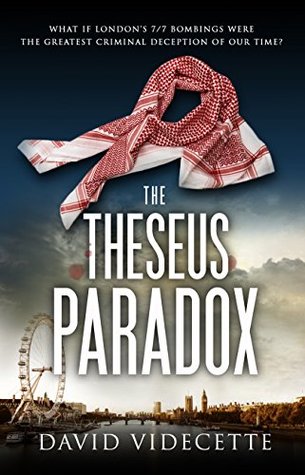 July 2005: in the midst of Operation Theseus, the largest police investigation that the UK has ever known, Detective Inspector Jake Flannagan begins to ask difficult questions that lead to the mysterious disappearance of his girlfriend and his sudden suspension from the Metropolitan Police.

Who masterminded London’s summer of terror?
Why can’t Flannagan make headway in the sprawling investigation?
Is Jake’s absent girlfriend really who she claims to be?

While hunting for the answers to the most complex case in British history, one man will uncover the greatest criminal deception of our time.

Terror, extremism and fear of the unknown,
Sometimes the answer is much closer to home.

This has been sitting patiently waiting on my Kindle for a while, but I finally put time aside to read it, much to the delight of my OH. This was one of the rare books that he enjoyed without the ubiquitous “but” when I asked him it what it was like. So with rave reviews, and a personal commendation, why the delay? If I’m honest, a part of me thought – do I really want to read about the 7/7 bombings and terrorist attacks? I remember the real events all too well and it didn’t particularly want to re-live the events on the page. Well for anyone with similar misgivings, please cast them aside. This is a book, which is essentially a police procedural, only this time the concentration is less on the who, but the why and were others involved. It had me hooked from the beginning and was finished in 24 hours.

The story is told by DI Jake Flanagan, a flawed, maverick at the centre of the investigation. It’s a straightforward timeline plot (hurray), so no confusing time shifts and because it’s Jake’s story, no additional narrators to muddy the water. The fairly short chapters draw you in, help to ratchet up the tension and maintain a cracking pace. Despite Jake’s less than savoury  behaviour lapses, he’s actually a sympathetic character. He’s intelligent, his heart is in the right place, he just has difficulty coping. His strategies are just less than ideal, especially for someone in his position.

As well as following the investigation into the bombings, we also follow Jake on his self destruct journey with his personal relationships. With a broken marriage, daughters he doesn’t see as often as he should and a girlfriend that may or not be what she seems, this is clearly as problematic as his work life.

I loved this book, because of the author’s background, it was well researched, well told and everything felt authentic. It’s impossible to unravel the fact from the fiction as all the events are documented and factual. I can remember the places and actions being referred to, it was real and all very plausible and when I got to the end – I didn’t see that coming.

As the author says ‘I can’t tell you the truth, but I can tell you a story…’  and oh what a story!