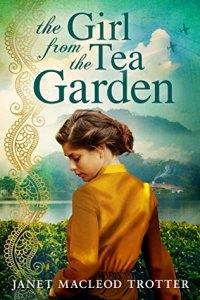 The Girl from the Tea Garden by Janet MacLeod Trotter. With many thanks to Janet for this ARC, which is Book 3 in the India tea series. Due to be published on 6 December.

In the dying days of the Raj, Anglo-Indian schoolgirl Adela Robson dreams of a glamorous career on the stage. When she sneaks away from school in the back of handsome Sam Jackman’s car, she knows a new life awaits—but it is not the one she imagined.

In Simla, the summer seat of the Raj government, Adela throws herself into all the dazzling entertainments 1930s Indian society can offer a beautiful debutante. But just as her ambitions seem on the cusp of becoming reality, she meets a charming but spoilt prince, setting in motion a devastating chain of events.

The outbreak of the Second World War finds Adela back in England—a country she cannot remember—without hope or love, and hiding a shameful secret. Only exceptional courage and endurance can pull her through these dark times and carry her back to the homeland of her heart. 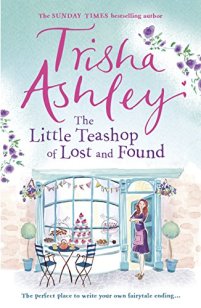 The Little Teashop of Lost and Found by Trisha Ashley. Many thanks to the publisher for this paperback copy. Kindle and hardback copies due out 3 March.

Alice Rose is a foundling, discovered on the Yorkshire moors above Haworth as a baby. Adopted but then later rejected again by a horrid step-mother, Alice struggles to find a place where she belongs. Only baking – the scent of cinnamon and citrus and the feel of butter and flour between her fingers – brings a comforting sense of home.

So it seems natural that when she finally decides to return to Haworth, Alice turns to baking again, taking over a run-down little teashop and working to set up an afternoon tea emporium.

Luckily she soon makes friends – including a Grecian god-like neighbour – who help her both set up home and try to solve the mystery of who she is. There are one or two last twists in the dark fairytale of Alice’s life to come . . . but can she find her happily ever after? 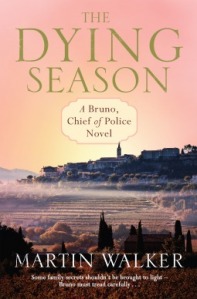 The Dying Season by Martin Walker. Book 8 in the Bruno Courreges series) 99p

The Dordogne town of St Denis may be picturesque and sleepy, but it has more than its fair share of mysteries, as Bruno, chef de police, knows all too well.

But when Bruno is invited to the 90th birthday of a powerful local patriarch – a war hero with high-level political connections in France, Russia and Israel – he encounters a family with more secrets than even he had imagined. When one of the other guests is found dead the next morning and the family try to cover it up, Bruno knows it’s his duty to prevent the victim from becoming just another skeleton in their closet. Even if his digging reveals things Bruno himself would rather keep buried.

Meanwhile, very modern battles are being fought in St Denis between hunters defending their traditions and environmentalists protecting local wildlife. Neither side, it seems, is above the use of violent tactics.

At the centre of it all, Bruno must use all his cunning and character to protect his community’s future from its present – and its past. 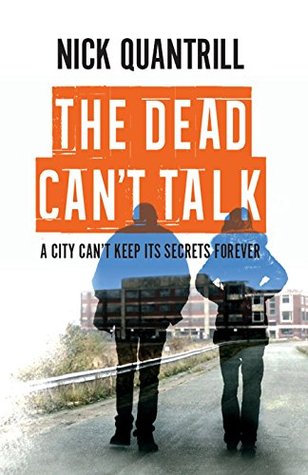 How far will Anna Stone, a disillusioned police officer on the brink of leaving her job, go to uncover the truth about her sister’s disappearance?

Approached by Luke Carver, an ex-Army drifter she’s previously sent to prison, he claims to have information which will help her. As the trail leads from Hull and the Humber’s desperate and downtrodden to its great and good, an unsolved murder twenty-five years ago places their lives in danger, leaving Stone to decide if she can really trust a man who has his own reasons for helping. 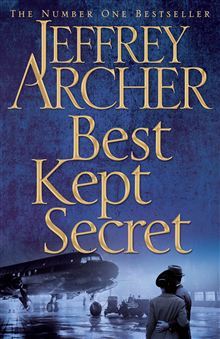 1945. The vote in the House of Lords as to who should inherit the Barrington family fortune has ended in a tie. The Lord Chancellor’s deciding vote will cast a long shadow on the lives of Harry Clifton and Giles Barrington.

Harry returns to America to promote his latest novel, while his beloved Emma goes in search of the little girl who was found abandoned in her father’s office on the night he was killed.

When the General Election is called, Giles Barrington has to defend his seat in the House of Commons and is horrified to discover who the Conservatives select to stand against him. But it is Sebastian Clifton, Harry and Emma’s son, who ultimately influences his uncle’s fate.

In 1957, Sebastian wins a scholarship to Cambridge, and a new generation of the Clifton family march onto the page. After Sebastian is expelled from school, he unwittingly becomes caught up in an international art fraud involving a Rodin statue that is worth far more than the sum it raises at auction. Does he become a millionaire? Does he go to Cambridge? Is his life in danger? 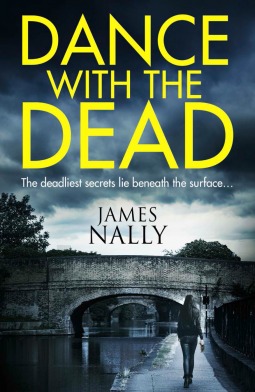 Dance with the Dead by James Nally (99p)

PC Donal lands himself a place on the murder squad just as his unconventional brother, journalist Finton, unearths the secret double life of Elizabeth.

The bodies mount, each clinging to the strands of hair belonging to the previous victim. The police are convinced it’s the act of a serial killer. But how does Donal convince them it’s not?

The only people he can trust are the victims he dances with in his dreams.

Kindle Freebies (when I downloaded) 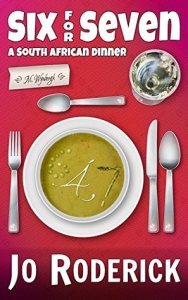 Six for Seven by Jo Roderick

What are you served for dinner while in the company of a lecherous reverend, an aging beauty queen, a gay lottery presenter, a guru, a shrink, a few reporters, and an odd assortment of South African parodies? Why, dinner of course! The rest is just dessert!

This novel takes a quirky look at South Africa, its inhabitants, and the comedy that is politics. This is what some real South Africans are like. Some you may like and they will be back in their own book series.
Do join us! Dinner is served, settle in, and get to know everyone at the table. 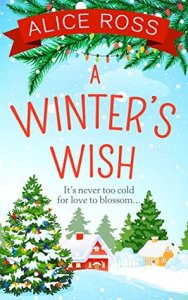 A Winter’s Wish by Alice Ross

Amelia is at breaking point. She’s just lost her job and Doug, the love of her life, still hasn’t broken up with his girlfriend. Surely a trip to the quiet countryside is just what she needs?

Phil is about to leave beautiful Buttersley for the other side of the world! The sunny shores of Australia will mean a new life with his girlfriend, but something is holding him back…

Ella has never felt this way before – Jake O’Donnell is the most gorgeous man she’s ever seen. And the more time she spends babysitting his kids, the more her feelings grow!

Stan should be happy. He loves his wife and their adorable baby girl more than anything! So why, when everything’s finally going right, are they arguing more than ever?

One thing’s for sure, even when Buttersley’s first snowflakes begin to fall, it’s never too cold for love to blossom… 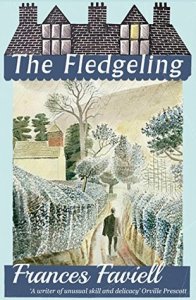 The Fledgeling by Frances Faviell

Neil Collins is going AWOL from his National Service – for the third time. Twice he has served time for previous desertions and been sent back, despite being hopelessly unsuited to military life. This time, terrorized by a bullying fellow soldier determined to escape himself, Neil intends to make his escape a permanent one. He heads to London, to the dreary, claustrophobic rooms where his twin sister, Nonie, and their dying grandmother live, periodically invaded by prying neighbours, a little girl who has befriended Mrs Collins, a curious social worker, and other uninvited visitors.

The Fledgeling (1958) traces the single day following Neil’s desertion, and its impacts on Neil, Nonie, the tough-as-nails Mrs Collins, and others. Each of the characters comes vividly alive in Faviell’s sensitive and observant prose. At times containing all the tension of a thriller, at others a profound drama of familial turmoil, Faviell’s third and final novel is dramatic, compelling, and emotionally wrenching. This new edition features an afterword by Frances Faviell’s son, John Parker, and additional supplementary material. 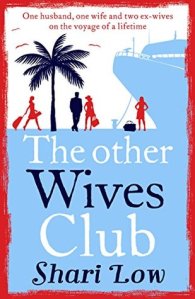 The Other Wives Club by Shari Low

Three women are thrown together on a Mediterranean cruise to celebrate a milestone birthday of the man they all once loved. What could possibly go wrong?

When Tess married Drew Gold, she knew his two ex-wives were still in his life.

Now Drew has planned a luxury cruise to celebrate his birthday… and the former Mrs. Golds are all coming too.

When it comes to style, fashion editor, Mona, never puts a Louboutin wrong.

Now it’s time to reclaim the only man she ever really loved… if she can tempt Drew away from his new wife for a second time.

When Drew left her for Mona, Sarah’s emotions went into hibernation. 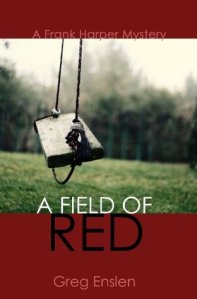 A Field of Red by Greg Enslen

Ex-cop Frank Harper doesn’t want to get involved. Harper is visiting the small Ohio town of Cooper’s Mill, trying to reconnect with his estranged daughter and a grandson he’s never met. But he finds the town gripped in fear-two young girls have gone missing, taken in broad daylight from a busy street. And the police are coming up blank. But once Harper is drawn reluctantly into the investigation, he’ll stop at nothing to find the girls. And he doesn’t care who gets in the way.