Signing Off For Christmas

I think it’s time I stepped away from the internet and concentrated on Christmas. This year I have decided to adopted the Swiss tradition of decorating on Christmas Eve. What that really means is I’ve had no option. Visiting relatives, work and the general mayhem at this end means I haven’t done it yet. It wouldn’t be the first year we were decoration-less but as this is hopefully the last year in this house (oddly the same thing we thought last year) I think I should make the effort.

I’ve made many new author and blogging friends this year, especially since I decided to put my head above the parapet and join Twitter. Introducing my Time and Place feature has also attracted a new audience to the blog, for which I am very thankful.

I’m now off to scatter a few baubles about before indulging in my newly adopted Icelandic Christmas Eve (I’m happy to adopt any tradition that suits my needs!).  Icelanders have a beautiful tradition of giving books to each other on Christmas Eve and then spending the night reading. This custom is so deeply ingrained in the culture that it is the reason for the Jolabokaflod, or “Christmas Book Flood,” when the majority of books in Iceland are sold between September and December in preparation for Christmas giving. For a fuller description go to (http://www.treehugger.com/culture/icelanders-give-books-christmas-eve.html) 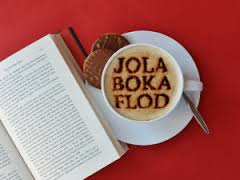 So I’d like to wish all my fellow bloggers, friends, readers and supporters a very Merry Christmas. I appreciate some of you may not believe or celebrate but trust you will still accept the warm wishes of the sentiment.