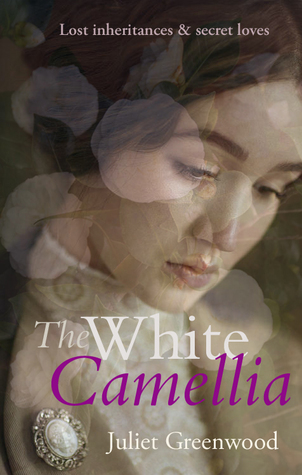 From the back cover

1909. Cornwall. Her family ruined, Bea is forced to leave Tressillion House, and self-made businesswoman Sybil moves in. Owning Tressillion is Sybil’s triumph – but now what? As the house casts its spell over her, as she starts to make friends in the village despite herself, will she be able to build a new life here, or will her old ghosts and hatred always rule her heart?

Bea finds herself in London, responsible for her mother and sister’s security. Her only hope is to marry Jonathon, the new heir. Desperate for options, she stumbles into the White Camellia tearoom, a gathering place for the growing suffrage movement. For Bea it’s life-changing, can she pursue her ambition if it will heap further scandal on her family? Will she risk arrest or worse?

When those very dangers send Bea and her White Camellia friends back to Cornwall, the two women must finally confront each other and Tressillion’s long buried secrets.

Juliet Greenwood’s latest historical offering epitomizes my favourite sort of historical fiction because it takes as one of its main themes, a factual subject, and in this case it’s the fight for Women’s Suffrage. The White Camellia of the title is the fictional name given to one of the growing number of London cafés and tea rooms designed to cater for women, allowing them to meet in safety without fear of molestation or being accused of breaching propriety.  As such they proved a popular meeting place for suffragists and here we find it being run in support of  The Suffrage League of Women Artists and Journalists. Like the White Camellia it is a fictional, but has its roots in historical counterparts.

As if the subject of suffragettes and their fight for the vote was not engaging enough, the book also has the added drama of betrayal, loss, family secrets and of course romance. A perfect recipe for settling down and losing yourself.

The book gripped me from the start with the opening chapters setting the scenes perfectly. One strand of the story opens in Cornwall with Sybil taking possession of Tressillion House and the other is set in London with Bea seeking sanctuary in what she learns is a suffrage tea room. As the story unfolds, in alternating sections, it’s clear that both Sybil’s and Bea’s lives have a connection other than Tressillion House, but exactly what is a mystery that I’ll leave you to discover.

While Sybil and Bea are very different characters, they are each likeable and admirable in their own way. Sybil has the confidence, strength and ability of the self-made woman, but there is also an underlying turmoil that threatens to crack the veneer. Bea on the other hand is initially more diffident but as her confidence grows, she finds the strength to make a stand and discover what she is capable of.

While the book follows the developing story of Sybil and Bea, it has a number of supporting but no less important characters. Not all are likeable (yes you Jonathan) and others have you falling just a little bit in love with them (Oh Madoc), but they all help to give the book depth and realism. The locations of London and Cornwall are also enticing and both have their attractions that offer a change of pace and lifestyle that adds a further balance to the book.

I’ll admit that initially it was the suffrage theme that appealed to me, as I’ve always been interested by the selflessness of the suffragettes. What they endured both outside and in prison – beatings, sexual humiliation, abuse and force feeding; all in the name of gaining our right to vote is something we should never forget. Yet as absorbed in that side of the story as I was, I found myself becoming increasingly absorbed in the secrets of the Tressillion estate and the attempt to re-open the mine (I’m clearly missing Poldark).

I can thoroughly recommend this beautifully written book on all fronts – character, plot, locations, historical accuracy and realism. Enjoy.

I received a copy of this book via the author to enable this review.

Available from Amazon.co.uk and Amazon.com