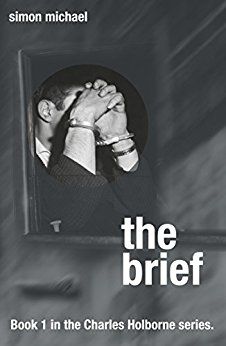 1960s London – gang wars, corrupt police, vice and pornography – ex-boxer, Charles Holborne, has plenty of opportunities to build his reputation with the criminal classes as a barrister who delivers. But Charles, an East End boy made good, is not all he seems, and his past is snapping at his heels. When his philandering wife has her throat slashed, Holborne finds himself on the wrong side of the law and on the run. Can he discover the truth of the brutal slaying and escape the hangman’s noose? Based upon real Old Bailey cases and genuine court documents, The Brief is the first in barrister Simon Michael’s series of compelling criminal dramas, an evocative slice of sleazy glamour from the Swinging Sixties. Simon Michael delivers an authentic and addictive read for any crime fan.

When I bought this book it was originally intended for my OH. I had heard good things about it, but the setting of gangland London in the 1960’s epitomised by the Krays and the Richardsons was something that didn’t appeal to me. Having read it, the OH suggested I read it as I would enjoy it – so I did. All I can say is, if like me, you had misgivings, cast them aside this is a cracking read. The gangland element is as much a background motif to add some context to the nature of the criminality and corruption that was prevalent at the time. It is as much an insight into the workings of Chambers and the criminal justice system as it is the criminals who inhabit it.

Our ‘hero’,  the charismatic Charles Holborne is a barrister who has made his way in life, despite his background, rather than because of it. As an East End Jewish boy made good, his background with naturally acquired survival skills and boxing clubs meant he probably had more in common with some of his clients than his colleagues. It certainly meant he was more tolerated than accepted by many of his co-workers.

When Charles’s wife is murdered, for reasons I suggest you discover yourself, he becomes the prime suspect. Given the at worst – corrupt, or at best – highly biased police investigation into his case, it’s up to Charles via fair means or foul to uncover the truth.

I was hooked from the beginning and especially drawn to the internal politics that typified Chambers. As someone who had been addicted to the tv programmes ‘This Life’ and ‘Silk’ this was my thing (why did I not discover this earlier?). I loved the back-biting the infighting and the changing allegiances all overseen by the barristers’ clerks who appear to wield the power. Added to this was the prevailing period prejudices of who you know and where you came from, mattering more than what you know and where you are now. The author’s background as a barrister meant there was an authenticity to the dialogue and the court practices that were portrayed. The use of original court transcripts from real Old Bailey cases only served to add to the realism and authoritative portrayal of its 1960’s setting

As we follow Charles in his professional and private life, we get to appreciate his abilities and his honesty and his innate sense of fairness, qualities that will result in his past coming back to haunt him. The problem is, there are several people who rightly or wrongly hold grievances against him. When his wife is murdered, the pace really ratchets up and I was praying for Charles to prove his innocence. Whether the final outcome proves to be the right one, I’m not saying, but I really recommend you read this for yourself to find out.