“The truth costs nothing, but a lie can cost you everything…”

June 2007: a barbaric nail bomb is planted outside a London nightclub, a spy is found dead in his garden, and a blazing Jeep is driven into Glasgow airport. Three events bound by an earth-shattering connection that should have remained buried forever.

From the author of ‘The Theseus Paradox’, the smash-hit 7/7 thriller based on true events, comes the sequel about a real-life mystery that threatens to destroy a nation. Detective Inspector Jake Flannagan must uncover how a series of astonishing events are inextricably linked, before the past closes in on him.

We all have secrets we say we’ll never tell…

As I was late to the party with The Theseus Paradox I was keen to make sure I didn’t leave this one waiting so long. Though on the plus side it meant I didn’t have as long as others to become re-acquainted with Jake. Having done so, I’m happy so say I wasn’t disappointed, which is a great relief after such an amazing debut.

So Jake is back, as maverick and troubled as ever, though in this outing we get to see a different side to him.  We get to glimpse more of what makes him tick, and the origins of his darker side. It makes him a much more rounded  and sympathetic character, although I suspect we all loved him anyway (despite his carousing ways).

The book opens with Jake doing what he does best, getting himself into an explosive situation (literally)  which sees him having to report to his nemesis DI Mark Castle (you know this isn’t going to work well).  Fortunately his Superintendent has a more sympathetic approach and cuts him some slack (or should that be gives him more rope to hang himself – with Jake it’s often hard to tell) to investigate another breaking incident up in Glasgow. So with car bombs, blazing jeeps and a dead spy there’s a lot going on, so just what Jake needs is ex girlfriend Claire throwing her problems into the mix.

As ever the incidents are based on real events which makes it difficult to know where the facts end and the fiction begins – if indeed it does. That’s something we can never be sure of, especially when the extensive appendix at the end of the book, clarifies the facts to leave you more confused than ever about you’ve been reading. As the joy of reading these books, lies in not knowing what is coming next, I have no intention of discussing plot but will say that it’s themes are as topical now as they were when the ‘events’ took place. In addition to ‘terrorism’ the book focuses around the heady themes of corruption, cover ups and dodgy dealings which really leave you reeling at the depth and extent of their coverage.

It’s a pacy and complex read, perhaps more so than The Theseus Paradox, because this time, although the incidents were all reported, they probably had less of an impact on our consciousness than 7/7. Consequently, I for one knew less about the background and the complex issues that ‘might’ have played their part. I also think this book is more personal dealing as it does, with Jake’s moves towards ‘recovery’ and his complicated personal relationships with his ex-wife and girlfriend – my what a plot line that latter thread is.

There is a some light relief though, with the relationship Jake has with his partner Lenny. I hope he stays around to keep an eye on Jake in the future as I suspect that while Jake might try to exorcise his demons, they might be around for a while. As David has expressed his intention of writing more, I now have to wait to find out what’s in store for our damaged hero.

If you’re tempted to get acquainted with Jake – and I highly recommend you do, I should say that while this can be read as a standalone, it would be a real shame to miss out on Jake’s first outing. These books are not only gripping thrillers, they really make you think and question perceptions of what we think we know. To quote the author he “really can tell you a story”. 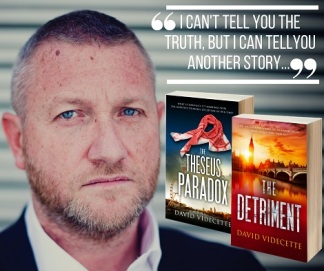 As a Metropolitan Police detective, David has worked on a wealth of infamous cases. He’s placed bugs on scores of vehicles, searched hundreds of properties, chased numerous dangerous criminals and interviewed thousands of witnesses.

David Videcette is proud to support the charity, The Police Dependants’ Trust, through sales of his crime thrillers.

Sales of The Theseus Paradox and The Detriment are supporting the National Welfare Contingency Fund which helps officers who have been involved in a major incident such as a terrorist attack. The fund will provide assistance with personal care plans, welfare support officers and talking therapies – enabling officers to better deal with the aftermath of such an incident.

I’m a member of the affiliate schemes run by Amazon, and Hive Books. Please read my Affiliate Links page for full details.