#ThrowbackThursday – The Soul of Discretion by Susan Hill – 4*s @susanhillwriter

Throwback Thursday is a weekly meme hosted by Renee at It’s Book Talk. Throwback Thursday was designed as an opportunity to share old favorites as well as older books in our TBR. As I started reviewing on Goodreads long before I started my blog, it seemed a great way of sharing my earlier reviews (which I hope have improved since the early days).

So this week I’m revisiting The Soul of Discretion by Susan Hill, Book 8 in the Simon Serrailler series – first reviewed in January 2015. 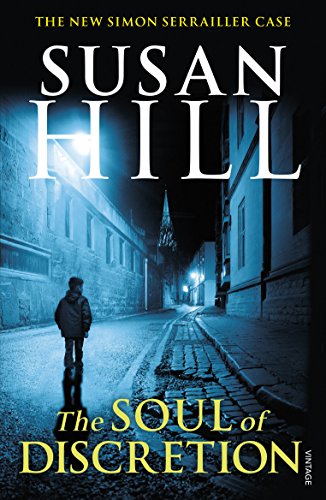 The cathedral town of Lafferton seems idyllic, but in many ways it is just like any other place. As part of the same rapidly changing world, it shares the same hopes and fears, and the same kinds of crime, as any number of towns up and down the land.

When one day DC Simon Serrailler is called in by Lafferton’s new Chief Constable, Kieron Bright, he is met by four plainclothes officers. He is asked to take the lead role in a complex, potentially dangerous undercover operation and must leave town immediately, without telling anyone – not even his girlfriend Rachel, who has only just moved in with him.

Meanwhile, Simon’s sister Cat is facing difficult choices at work that will test her dedication to the NHS. But an urgent call about her and Simon’s father, Richard, soon presents her with a far greater challenge much closer to home.

To complete his special op, Simon must inhabit the mind of the worst kind of criminal. As the op unfolds, Lafferton is dragged into the sort of case every town dreads. And Simon faces the fight of his life. (Goodreads description)

I have read all of the previous titles in the Serrailler series so I was delighted to receive the latest via Netgalley in return for an honest review.

The Soul of Discretion, did not disappoint and was as good as it predecessors. Susan Hill is a great writer and has the knack of drawing you in almost immediately. The books do not depend on shock storylines, or graphic violence and gore which is becoming a growing feature of many contemporary thriller/crime novels. Hill relies on solid plot and great characters to keep you coming back for more.

The series has always been a clever balance of the professional and private in regard to Simon Serailler and this latest novel takes this one stage further and darker. While Simon has gone under cover to infiltrate a paedophile ring, his absence from Lafferton allows his family to come more to the fore than usual, particularly his father who has his own brush with the law when he is accused of rape.

The various story lines focus on many current social issues, the state of the NHS; the debate about end of life care; the nature and consequences of rape; and the nature of paedophilia. Thankfully this latter topic is handled well. Enough detail to leave no doubt that those involved are guilty of what must be one of the most reviled and abhorrent crimes but without being too gratuitous or graphic.

This latest book also sees a shift away from a traditional police procedural as in this case we are well aware of who the guilty parties are. This sees Serailler trying to make sure they face justice and in so this takes him to a much darker place with life changing consequences.

If you have never read any of the Simon Serailler series, I thoroughly recommend that you do, with the proviso that you start from the beginning.