Hope is the thing with feathers … 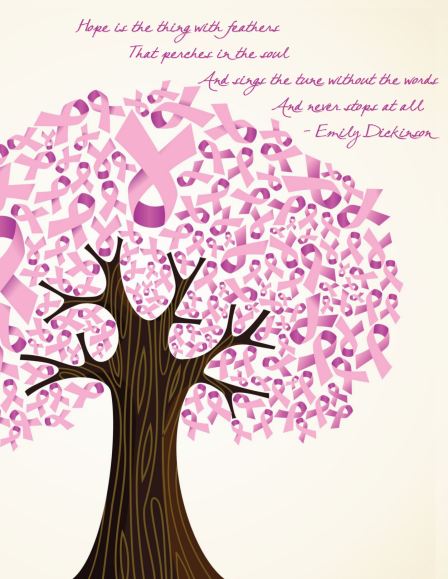 Well this is a post I never thought I’d write for several reasons, not least of which is the fact that I tend not to share my personal ‘stuff’. However, sometimes it’s good to talk as the old BT ads used to tell us. In this case, even if no-one is listening, I get to offload my thoughts and put things in perspective.

It’s been a strange few weeks or so, that started with the discovery of a small lump in my breast. If I’m honest I didn’t do something straight away as a) I was going to Harrogate and b) I have a history of cysts. So I let it drift a week or so and when it didn’t do the decent thing and disappear I went to the doctor. By mid afternoon that same day I had an appointment at the hospital for the normal routine tests.

The day of the appointment arrived and OH and I trooped off to the hospital and the usual procedures were followed. Another examination to confirm said lump, the dreaded mammogram and then the ultrasound. After two previously abnormal mammograms which result in the discovery of nothing more sinister than cysts once the ultrasound has done its thing I was feeling quite calm. But then the ultrasound was taking a lot longer than usual and nobody was mentioning cysts. It was the mention of performing a core needle biopsy that suddenly turned a routine visit into something I hadn’t expected and wasn’t prepared for. I should say at this point I HATE needles and was fast becoming a quivering wreck at the prospect.

I survived, with many thanks to the lovely nurse who held my hand, I say held, hers was crushed by the end of the procedure. Once dressed and a bit less shocked I was dispatched with a sheet outlining the numerous horrors I might be faced with, swelling, bruising, pain, etc. etc. I’m delighted to say I felt a fraud, barely a bruise, no pain and no swelling – result! What I did have though was the longest 10 days of my life until I got the results back.

Yesterday was results day, so OH and I trooped back to the same hospital, though got a bit concerned when they checked me in and this time directed me to the Macmillan Cancer Clinic. Midway through trying to get wi-fi access to download a book to my Kindle for the OH who’d forgotten his  I got called through.

OK let’s cut to the chase, as I’ve already discovered,  there is no easy way of saying this, I have breast cancer. My little lump that accompanied me to Harrogate, met Lee Child, Ian Rankin and befriended lots of lovely people is 15mm of Grade 2 cancer – the bugger.

So I am now the proud? owner of a lovely Macmillan nurse called Jane and it appears my life for the foreseeable future is a merry round of appointments and treatments. Only this afternoon I was invited for a lovely pre-op next week. This pales into insignificance in the face of the delightful injection of a radioactive substance on the 4th Sept prior to my wide local excision (lumpectomy to you and me) and sentinal lymph node biopsy on the 5th. This latter procedure is also accompanied by a blue dye to locate the position of the sentinel lymph node.  We have been warned I’ll look like a pale imitation of a smurf for up to 24 hours and the added joy I’ll be capable of crying blue tears and producing blue urine.

Needless to say, within the space of 24 hours my OH and I have learnt words we never knew before and have uttered quite a few we knew already, though not that are suitable for polite company. The one good thing about yesterday, is that my surgeon was lovely and accommodating about a holiday we have booked for mid Sept. As it doesn’t involve flights or exotic places, she shuffled her diary around to fit me in on 5th rather than 12th so we can still go away.  If I’m being honest here, I was initially more concerned about missing my holiday than the not insignificant diagnosis that she hit us with (albeit very gently). So there, it’s now all in the open and it feels quite cathartic.

I’m not the sort of person to shy away from reality, and the reality is, I like many women and men before me, have breast cancer. Sadly I also know there’ll be just as many that follow a similar journey as well. However, I shall be carrying on as normally as possible (with no doubt a few more expletives) and if anyone wants to join me, I daresay I’ll keep you all updated with proceedings or just carry on talking to myself.