Throwback Thursday is a weekly meme hosted by Renee at It’s Book Talk. Throwback Thursday was designed as an opportunity to share old favorites as well as older books in our TBR. As I started reviewing on Goodreads long before I started my blog, it seemed a great way of sharing my earlier reviews (which I hope have improved since the early days).

So this week I’m revisiting Follow the Leader by Mel Sherratt first reviewed in February 2015. 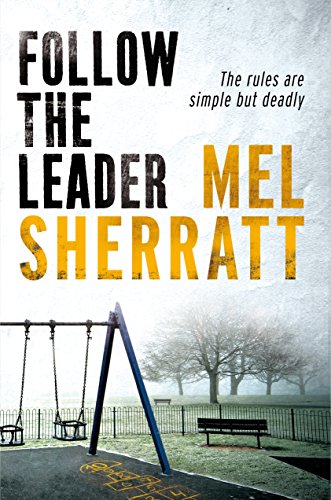 A man’s body is found on a canal towpath. In his pocket, a magnetic letter in the shape of an E.

Days later, a second victim is found, this time with the letter V tucked into her clothing.

As the body count rises, the eerie, childlike clues point to a pattern that sends DS Allie Shenton and her colleagues into full alert.

The race is on. Allie and the team must work quickly to determine where the killer will strike next. The rules are simple but deadly—to catch the killer, they must follow the leader.

A thriller with a difference as from quite early on, we know who the killer is and why he is targeting those he kills. You might expect this to detract from the tension, but it doesn’t.

When a man is stabbed to death, walking his dog by the canal, the only clue DS Allie Shenton and her team have got is a plastic magnetic letter left with the body. We know who he was stabbed by and why, but we also have no clue as to what the letter means.

When a second body is found, again with a plastic letter, it then becomes clear to the police that the murders are linked. So the race is on to make the link and catch the culprit. Although a link is identified quite early on, a lack of motive is the main stumbling block to pointing them in the right direction.

During the course of the investigation we get to know the investigating officers. DS Shenton in particular. It makes a change to have a police team, without mavericks, back biting and career politics forming the background. Here we have normal, reliable, likeable characters with real life worries and relationships and we’re willing them on to make the right connections. The case is further complicated by another vicious incident which may or may not be connected to the ongoing investigation, but directly involves DS Shenton and impacts on her life in a big way.

The nature of bullying and abuse makes an interesting sub topic. From the beginning we know the killer was bullied at school and horrendously abused at home, and the killings are his way of extracting revenge. However the school bullies have now grown up and would for the most part not seen what they did as bullying, the boy they persecuted at school, doesn’t even hit their radar as it meant nothing. A message to us all to think about actions and consequences and how they affect other people. Though whatever the “victims” did in the past I wouldn’t personally recommend such extreme comeuppance.

Having not read the previous book in the series, I was not party to the full background of some of the themes, and characters that play out in this book, but I don’t think that matters. This was a good solid police procedural that kept the pages turning and ended with unresolved business suggesting more to come.