The Dry by Jane Harper

WHO REALLY KILLED THE HADLER FAMILY?

Amid the worst drought to ravage Australia in a century, it hasn’t rained in small country town Kiewarra for two years. Tensions in the community become unbearable when three members of the Hadler family are brutally murdered. Everyone thinks Luke Hadler, who committed suicide after slaughtering his wife and six-year-old son, is guilty.

Policeman Aaron Falk returns to the town of his youth for the funeral of his childhood best friend, and is unwillingly drawn into the investigation. As questions mount and suspicion spreads through the town, Falk is forced to confront the community that rejected him twenty years earlier. Because Falk and Luke Hadler shared a secret, one which Luke’s death threatens to unearth. And as Falk probes deeper into the killings, secrets from his past and why he left home bubble to the surface as he questions the truth of his friend’s crime.

The Shoreline and the Sea by John Porter

The novel centres around Walker, an English photographer who arrives in a small Italian village one morning. His girlfriend has gone missing – abducted? or has she abandoned him? – and the village seems a good a place as any to begin looking for answers. This place has its own secrets, however, throwing up many more mysteries, and providing only more questions when all Walker craves are answers. As Walker becomes increasingly entangled in the lives of the village’s strange characters, events threaten to overpower him… 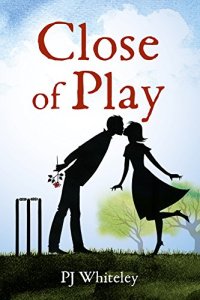 Close of Play by PJ Whiteley

Brian Clarke has an ordered life, a life of village cricket, solid principles, and careful interaction with those around him. He is resolutely fending off advancing middle-age with a straight bat, determined to defend his wicket against life’s occasional fast balls.

Then he meets Elizabeth – a gentle, caring, genuinely selfless soul who is a glowing bloom amongst the ordered hedgerows of his existence. As Elizabeth demands Brian’s interest…and breathes hope into his heart…he must reassess his self-defined role as the lone batsmen and fight to find the courage to fall in love. Or risk losing her forever.

Close of Play is a thoughtful, funny, beautifully honest story of love and manners. It’s a tale of missed opportunities and a chance at redemption – and the fear of opening our hearts to another when we think we’ve forgotten how to love.

Inside the Whispers by A J Waines

Where the most dangerous place – is inside your own head…

Dr Samantha Willerby, a specialist in Post Traumatic Stress, has never seen anything like this before. Following a fire on the London Underground, three survivors seek her help – but although unmistakably traumatised, their stories don’t match the facts. Are they ‘faking it’? Sam’s confusion turns to horror when one by one, instead of recovering, they’re being driven to suicide.

When her lover, Conrad, begins to suffer the same terrifying flashbacks, Sam is desperate to find out what’s causing them and a mysterious and chilling conspiracy begins to unravel.

Then the nightmares begin for Sam…

Written in Bones by James Oswald

When a body is found in a tree in The Meadows, Edinburgh’s scenic parkland, the forensics suggest the corpse has fallen from a great height.

Detective Inspector Tony McLean wonders whether it was an accident, or a murder designed to send a chilling message?

The dead man had led quite a life: a disgraced ex-cop turned criminal kingpin who reinvented himself as a celebrated philanthropist.

As McLean traces the victim’s journey, it takes him back to Edinburgh’s past, and through its underworld – crossing paths with some of its most dangerous and most vulnerable people.

And waiting at the end of it all, is the truth behind a crime that cuts to the very heart of the city…

Set in Ceylon in the 1930s, this second book in the Inspector de Silva Mysteries offers another colourful, relaxing read as the arrival in the hill town of Nuala of the heir to an English earldom signals more trouble for the hapless Inspector de Silva and a new mystery to solve. Throw in a mega-rich Romanian count, his glamorous countess and an enigmatic British army officer and the scene is set for an entertaining mystery.

Christmas at the Comfort Food Cafe by Debbie Johnson

Becca Fletcher has always hated Christmas but she has her reasons for being Little Miss Grinch. Now, though, she can’t avoid her version of ho-ho-hell – because she’s travelling to the Comfort Food Cafe to spend the festive season with her sister Laura and her family. She’s expecting mulled wine, 24-hour Christmas movie marathons and all kinds of very merry torture.

Little does Becca know that the Comfort Food Cafe is like no other place on earth. Perched on a snow-covered hill, it’s a place full of friendship where broken hearts can heal, new love can blossom and where Becca’s Christmas miracle really could happen – if only she can let it…

Our House by Louise Candlish

On a bright January morning in the London suburbs, a family moves into the house they’ve just bought in Trinity Avenue.
Nothing strange about that. Except it is your house. And you didn’t sell it.

The Temptation of Gracie by Santa Montefiore

The extraordinary new novel from number one bestselling author Santa Montefiore: a timeless tale of life, love and families set in beautiful Tuscany.
You fell in love with the Deverill Chronicles, the intertwining tales of Martha Wallace, Bridie Doyle and Kitty Deverill. You were swept away to the vineyards of Bordeaux in The Gypsy Madonna, where you uncovered the secrets of an extraordinary painting. You waited with Rita Fairweather on the shore of the Atlantic, as she nurtured her ever-living hope that the love of her life, George Bolton, would return to her from Argentina.

And in her newest, most sweeping novel yet, you’ll fall in love all over again.