Today I’m pleased to announce that it’s the turn of Ruth Hogan to regale us with her Five on Friday. Ruth’s debut novel The Keeper of Lost Things made into my Top 5 books of 2017, so I’m eager to get my hands on The Wisdom of Sally Red Shoes which hit the bookshelves yesterday.

I was born in the house where my parents still live in Bedford. My sister was so pleased to have a sibling that she threw a thrupenny bit at me.

As a child, I loved the Brownies but hated the Guides, was obsessed with ponies and read everything I could lay my hands on.  Luckily, my mum worked in a bookshop.  My favourite reads were The Moomintrolls, A Hundred Million Francs, The Lion, The Witch and The Wardrobe, the back of cereal packets, and gravestones.

I passed enough O and A levels to get a place at Goldsmiths College, University of London, to study English and Drama.  It was brilliant and I loved it.

And then I got a proper job.

I worked for ten years in a senior local government position (Human Resources – Recruitment, Diversity and Training). I was a square peg in round hole, but it paid the bills and mortgage.

In my early thirties I had a car accident which left me unable to work full-time and convinced me to start writing seriously.  I got a part-time job as an osteopath’s receptionist and spent all my spare time writing.  It was all going well, but then in 2012 I got Cancer, which was bloody inconvenient but precipitated an exciting hair journey from bald to a peroxide blonde Annie Lennox crop. When chemo kept me up all night I passed the time writing, and the eventual result was THE KEEPER OF LOST THINGS.

I live in a chaotic Victorian house with an assortment of rescue dogs and my long-suffering husband.  I spend all my free time writing or thinking about it and have notebooks in every room so that I can write down any ideas before I forget them.  I am a magpie; always collecting treasures (or ‘junk’ depending on your point of view) and a huge John Betjeman fan.  My favourite word is antimacassar and I still like reading gravestones.

So over to Ruth

Wings by Birdy – It’s a truly haunting song and I want to go and live in the world portrayed in the official video!

Believe in yourself – you’re better than you think you are

Take every opportunity that comes your way

I was born lefthanded but injured my left hand when I was a child and so swapped to writing with my right hand. I still do many things lefthanded

I was goalkeeper in the school lacrosse team and hated it

I used to play violin

I have a phobia about potholing

To travel on the Orient Express (preferably to Venice)

To have singing lessons

Thanks so much for taking part Ruth. I suspect the advice re perming your hair was based on bitter experience. I wish someone had told me the same! I’ve never played lacrosse but was somehow (they were desperate) picked to play in goal (in the middle of winter) for the hockey team. The only consolation, I was never picked again. I hope you get to Venice – ideally via the Orient Express and the zip line sounds fun – you’d definitely get an adrenalin rush from that. 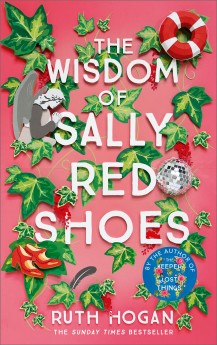 The Wisdom of Sally Red Shoes

Masha’s life has stopped. Once a spirited, independent woman with a rebellious streak, her life has been forever changed by a tragic event twelve years ago. Unable to let go of her grief, she finds solace in the silent company of the souls of her local Victorian cemetery and at the town’s lido, where she seeks refuge underwater – safe from the noise and the pain.

But a chance encounter with two extraordinary women – the fabulous and wise Kitty Muriel, a convent girl-turned-magician’s wife-turned-seventy-something-roller-disco-fanatic, and the mysterious Sally Red Shoes, a bag lady with a prodigious voice – opens up a new world of possibilities, and the chance to start living again. But just as Masha dares to imagine the future, the past comes roaring back …

The Keeper of Lost Things (see my review here)

Meet the ‘Keeper of Lost Things’…
Once a celebrated author of short stories now in his twilight years, Anthony Peardew has spent half his life collecting lost objects, trying to atone for a promise broken many years before.

Realising he is running out of time, he leaves his house and all its lost treasures to his assistant Laura, the one person he can trust to fulfil his legacy and reunite the thousands of objects with their rightful owners.

I’m a member of the affiliate schemes run by Amazon, and Hive Books. Please read my Affiliate Links page for full details.