As regular readers of this blog will know, I need more books like I need a hole in the head. But then when has that ever stopped me? So let me introduce you to my latest discovery. Some of you may already be acquainted with Unbound, if not, in brief, they are a crowdfunding publisher. Essentially they are a  team of publishers, writers, editors, designers – you name it – helping people bring their ideas to life. They take care of the whole process, from manuscript editing to shipping the first editions. As a reader I’ve previously looked at their website and considered helping an author achieve their dream of having a book published. What has normally stopped me, is the number of available projects and sheer indecision. Then along comes the Unbound Reading Club and problem solved. This is a feature that allows procrastinators like me, to help make books happen without having to make a direct choice.

Monthly must-read – a handpicked new title delivered to your inbox as an e-book.

Goodie bag – including one of their exclusive tote bags, and two limited edition Reading Club badges

Free shipping – on all your pledges and book purchases (to a max of 20 for non UK/ROI members).

Reading Club Letter – news from behind the scenes at Unbound HQ.

In addition to these member benefits, all the money raised by the Reading Club will go towards getting more books funded, so it’s win/win.

I decided not to dither any longer and I’ve signed up to the Reading Club and am looking forward to my monthly downloads, knowing that’s it helping to fund an author achieve their dream.

Having signed up I immediately received my first download (with the proviso that if I already had it they were happy to send an alternative). As it happened I don’t and better still it suits my tastes. Incidentally this would cost £10 to buy direct from Unbound and £9.99 from Amazon, so that £25 a year is looking good.

I am making an assumption that anyone signing up now would receive the same title. 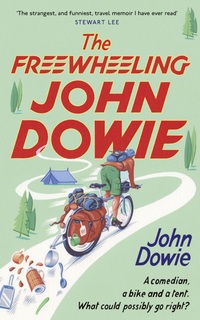 My comedy career began in 1971, which proves I have no comic timing. In 1971 there were no comedy clubs, no comedy agents and not much comedy future.

Inspired by Spike Milligan, John Dowie embarked on his comedy career in a time when such a thing was virtually unheard of, and then, just as alternative comedy began to be recognised by popular culture, he quit. And so began his next obsession – riding his bike.

Having been blessed (or cursed) with an addictive personality, Dowie quickly realises that what was once a simple hobby – cycling – will soon become something very different…

This book follows a similar route to his cycling habits: it meanders from place to place, occasionally gets lost but is unfailingly entertaining. Wending his way through France and Holland, round the lanes of Norfolk and over the hills of Devon, Dowie expertly leads his readers on a delightful journey through the trials, tribulations and triumphs of his life so far.

So if you’re tempted, or just want to investigate further – here’s the link