It’s the beginning of the month and time to look at this month’s offerings from Bookchoice. Described as “the digital book service in your pocket” Bookchoice select eight e-books and audiobooks  for £3.99 a month. Yes, you read that correctly £3.99 a month. Every month the Bookchoice team selects a range of titles  – from bestsellers and award-winners to the latest literary hits and sends them direct to your email inbox.  Where books are offered in e-book and audiobook format, the offer isn’t for one or the other – it’s for both!! I subscribed in January and here are the titles for this month. 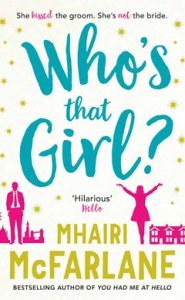 Who’s that Girl by Mhairi McFarlane

Edie Thompson had grand plans for her move to London: a snazzy new job, wild nights out with friends, perhaps even love… But after a small romantic indiscretion with one of her colleagues, she suddenly finds herself persona non grata in the city.

When Edie’s boss offers her the opportunity to relocate to Nottingham to ghost-write an actor’s memoir, she jumps at it as a way of reinventing herself. Nottingham, however, brings its own complications – not least Edie’s eccentric family and her gorgeous celebrity subject.

Who’s that girl? She’s Edie Thompson, and she’s about to find out. 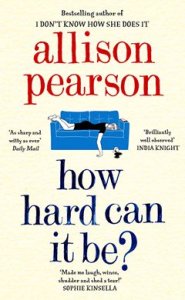 How Hard can it Be? by Allison Pearson

Last we saw Kate Reddy, she was leaving her high powered job to focus on her family. Fifteen years later, Kate is faced with a husband in the throes of a midlife crisis, aging parents, and impossible teenage children.

In order to keep the family afloat, Kate returns to the workforce, only to discover that years of raising children have made her irrelevant. And just when she thought things couldn’t get more complicated, an old flame re-enters the picture…

A warm, witty and timely account of what it means to be a working mum in this day and age. Essential reading for all women – young and old – in need of a good laugh.

The Transition by Luke Kennard

Karl and Genevieve are ‘adulting’. Yes, they rent a wallpapered conservatory in a shared house. And yes the only way they can afford it is through perfectly orchestrated credit card fraud. But still…

When it all falls apart, they are ordered to enrol in The Transition, a radical programme of self-improvement. It’s not a punishment, it’s an opportunity.

They’ll learn the arts of self-reliance, budgeting and dental hygiene. They might even save enough for a deposit on a flat in an ‘up and coming’ area. As long as they follow each step, and ignore the warnings carved into the bedpost.

It is 1867. In Victorian London, four-year-old Daisy Belle is about to make her swimming debut at the Lambeth Baths. And she won’t ever look back.

Aged 14, Daisy becomes the first woman to swim the River Thames, and soon afterwards, she leaves for America with the intention of making history by swimming across New York harbour. But there’s one problem: Daisy is swimming at a time when women aren’t supposed to swim.

Inspired by the careers of real women, Daisy Belle pays homage to the courage and bravery of the Victorian women who broke new ground in the fight for equality. 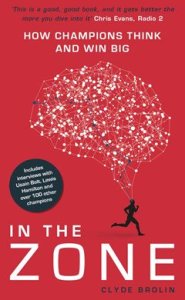 In the Zone by Clyde Brolin

What makes the difference between Championship and Premier League? Between silver and gold? Between personal best and the world’s best?

The Zone. That space where practice takes hold, and everything else falls away: no distractions, no worries, no second guessing.

Modern education has taught us how to think, but thanks to hours of interviews with some of the most legendary figures in sport, Clyde Brolin is able to offer us a new lesson: how not to think when it counts. How to stem the flow of mental detritus, and enter that mindset where the great become the greatest.

What was shocking at first was the silence. Roy had never noticed the sound the electricity had made behind the walls, but he knew when it was gone. Then one morning Johannesburg was empty, and the loudest sound left was the wind.

Then the noises that remained became frightening.

The lion’s cough, the hyena’s laugh, the vultures circling overhead. You could hear the plants inching forward, reclaiming the land the city had tried to concrete over. And there were the arguments between the survivors:

Rebuild the old world amongst the rubble, or adapt to the new order before it’s too late?

I’ll be Gone in the Dark by Michelle McNamara

In 1976, a violent man began attacking women in the suburbs of Sacramento, California. Over the next ten years, he sexually assaulted fifty women and murdered at least ten – but he was never caught.

Decades later, journalist Michelle McNamara became obsessed with finding the brutal psychopath, who she named the ‘Golden State Killer’. For years, she sifted through masses of evidence – in the form of police records and victim interviews – to single-handedly identify the killer. Tragically, she died while investigating the case, but many believe that her work directly led to the killer’s capture earlier this year.

Singular, riveting and sensitively-told, I’ll Be Gone in the Dark is the story of one woman’s compulsion to unmask a murderer – and succeed.

The first night Tanya can’t sleep she tries warm milk, and lies there wrestling with the sheets.

On the seventh night, she sits and stares into a book, hour after hour without turning the page. Outside the whole world is restless too. Strange cults embrace the new awakening, nuclear warships wash-up on land, and children are slaughtered in the hope that the taste of their blood might end this global insomnia.

But in Tanya’s bed, her partner lies curled up under the duvet. Paul can somehow still manage a good night’s sleep, even as the world becomes a waking nightmare.

In a small English hamlet, the summer harvest is at its end and the villagers look forward to a day of rest. But when they wake to find two columns of smoke on the horizon, suspicion abounds.

Whilst one column of smoke is explained by a fire, another signals the arrival of newcomers to their land. But it is the arrival of a third presence that, more than anything else, will threaten to disrupt the calm order of their lives.

Rich in detail and hauntingly atmospheric, Harvest is a mesmerising paean to rural life by a novelist at the height of his powers. 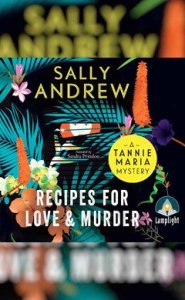 Recipes for Love and Murder by Sally Andrew

Tannie Maria is in her fifties and writes a successful cookery column for the local paper, the Klein Karoo Gazette. When her cookery column is scrapped in favour of an advice column, she decides to offer wisdom the only way she knows how: through her love of food.

As Tannie becomes an adept agony aunt, she thinks she may have found her calling – until one day, she receives a letter from a woman in an abusive relationship, and decides she must take matters into her own hands…

Clever, suspenseful and endlessly fun, Recipes for Love and Murder is a delicious new take on the whodunit.

Early one morning, Stella is called to the home of one of her clients, where their teenage son has been found murdered. Dealing with tragedy of this sort has become routine for her, but when searching through his belongings, she finds a notebook with her address in it… which can only mean that he was onto one of her deepest secrets, one she thought she’d left far behind.

The plot thickens as Stella’s wealthy neighbor goes missing, her wayward brother gets out of jail, and a handsome artist asks for her number. As she dives deeper into the underbelly of Melbourne crime, it becomes a race against time to find who she’s looking for, before they find her first.