Today it’s the turn of the ‘white haired Irishman’ Caimh McDonnell to share his Five on Friday. While his books are patiently waiting for me on my Kindle, my OH moved in and beat me to it, and Caimh is now one of his favourite authors. I spotted Caimh at Harrogate and was delighted when he agreed to take part in Five on Friday. 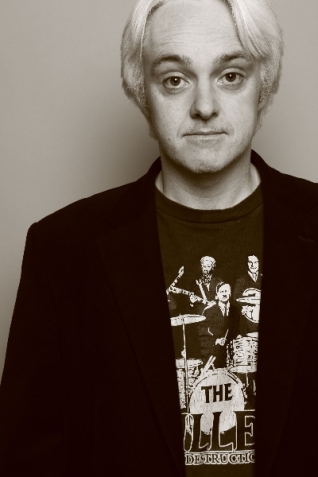 Caimh McDonnell is an award-winning stand-up comedian, author and writer of televisual treats. Born in Limerick and raised in Dublin, he has taken the hop across the water and now calls Manchester his home.

He is a man who wears many hats. As well as being an author, he is an award-winning writer for TV, a stand-up comedian and ‘the voice’ of London Irish rugby club. His debut novel, A Man with One of Those Faces was released in 2016. It was nominated for the best novel at the 2017 CAP awards and has hit Amazon bestseller charts on both sides of the Atlantic. It has now become book one in the Dublin Trilogy, along with The Day That Never Comes, Last Orders, and the prequel Angels in the Moonlight (yes, there really are four books in this trilogy). All are fast-paced crime thrillers set in Dublin and they are laced with distinctly Irish acerbic wit.

Caimh’s TV writing credits include The Sarah Millican Television Programme, A League of Their Own, Mock the Week and Have I Got News for You. He also works as a children’s TV writer and was BAFTA nominated for the animated series ‘Pet Squad’ which he created. He was a winner in the BBC’s Northern Laffs sitcom writing competition, where he was lucky enough to be mentored by Craig Cash and Phil Mealey of ‘Royle Family’ fame.

During his time on the British stand-up circuit, Caimh has firmly established himself as the white-haired Irishman whose name nobody can pronounce. He has brought the funny worldwide, doing stand-up tours of the Far East, the Middle East and the Near East (Norwich).

So, all-in-all, he manages to keep himself busy.

But he did find time for us, so over to Caimh:-

The Frames – Seven Day Mile – beautiful song and an inspirational band – took control of their own careers when dropped by their record label and went on to win an Oscar!

My phone – anyone who says otherwise is lying!

My eyemask – I’m a terrible sleeper

Vodka is not your friend

When ‘the one’ turns up you’ll know

The review of a gig I did a few years ago featured the phrase ‘not even a horrendous fart could derail this gig.’ I was on stage and led a 5 minute long humorous hunt for the culprit. It was me.

I used to clean up vomit for a living

How to pronounce my name

Go to a superbowl

Actually witness someone realising they’re wrong in a twitter argument

Be the announcer for the Irish national rugby team (I can do it – somebody call me!!)

Thanks so much for taking part Caimh (and I can confirm that most people don’t know how to pronounce your name – me, once being one of them). Good luck with waiting for someone to realise they’re wrong on Twitter (I suppose miracles can happen). You will hopefully have been the announcer for the Irish Rugby team before then.

He’s a good man having a bad day with the worst hangover.

All Bunny McGarry wants is a spot of breakfast and a decent cup of tea. So imagine how annoyed he gets when two masked men attempt to rob the New York diner he is in. Unfortunately, dealing with that problem just leads to a whole lot more. One of the diner’s other customers isn’t who she appears to be, and the odds aren’t great that she is going to live to see another breakfast.

So just how much trouble is she in?

Well, you know how they’re always telling us to pay attention to our pensions?

Some ex-employees of the US government are really taking that advice to heart by using their mayhem-creating abilities to maximise their investments. When one of their fund managers has a momentary crisis of conscience and confesses all to a woman he hardly knows, they will stop at nothing to deal with the problem.  Amy Daniels is in big trouble and the only thing keeping her alive is a man who is supposed to already be dead.

Disaster Inc is the first book in a new series featuring Bunny McGarry, beloved by those who enjoyed the critically-acclaimed Dublin Trilogy of books. It melds high-octane action with a distinctly Irish acerbic wit.

As a wise man once said, just because you’re done with the past, doesn’t mean the past is done with you.

Paul can’t let an incident from his past go. When he finds out a rival detective agency played a key role in it, he drags MCM Investigations into a blood feud that they can’t hope to win. Soon they’re faced with the prospect of the company going out of business and Brigit going out of her damn mind.

When long-buried bodies are discovered in the Wicklow Mountains, Bunny’s past starts closing in on him too. Who can he trust when he can’t even trust himself? When he finds himself with nowhere left to run and nobody he can turn to, will the big fella make the ultimate sacrifice to protect the ones he loves?

When all that’s left is the fall, the fall is everything.

And even the mighty fall.

Angels in the Moonlight

This book is a standalone prequel to The Dublin Trilogy.

For Detective Bunny McGarry, life is complicated, and it is about to get more so.

It’s 1999 and his hard won reputation amongst Dublin’s criminal fraternity, for being a massive pain in the backside, is unfortunately shared by his bosses. His partner has a career-threatening gambling problem and, oh yeah, Bunny’s finally been given a crack at the big time. He’s set the task of bringing down the most skilled and ruthless armed robbery gang in Irish history. So the last thing he needs in his life is yet another complication.

Her name is Simone. She is smart, funny, talented and, well, complicated. When her shocking past turns up to threaten her and Bunny’s chance at a future, things get very complicated indeed. If the choice is upholding the law or protecting those he loves, which way will the big fella turn?

Angels in the Moonlight is part of Caimh McDonnell’s critically acclaimed Dublin Trilogy series which melds fast-paced action with a distinctly Irish acerbic wit, and it is complicated.

Angels in the Moonlight was selected as a book of the month in the Rick O’Shea bookclub, Ireland’s largest bookclub. 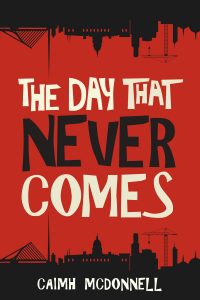 The Day That Never Comes (The Dublin Trilogy Two)

Remember those people that destroyed the economy and then cruised off on their yachts? Well guess what – someone is killing them.

Dublin is in the middle of a heat wave and tempers are running high. The Celtic Tiger is well and truly dead, activists have taken over the headquarters of a failed bank, the trial of three unscrupulous property developers teeters on the brink of collapse, and in the midst of all this, along comes a mysterious organisation hell-bent on exacting bloody vengeance in the name of the little guy.

Paul Mulchrone doesn’t care about any of this; he has problems of his own. His newly established detective agency is about to be DOA. One of his partners won’t talk to him for very good reasons and the other has seemingly disappeared off the face of the earth for no reason at all. Can he hold it together long enough to figure out what Bunny McGarry’s colourful past has to do with his present absence?

When the law and justice no longer mean the same thing, on which side will you stand? 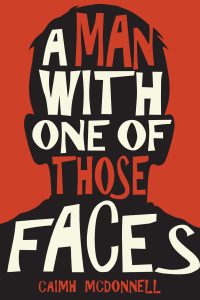 A Man With One Of Those Faces (The Dublin Trilogy One)

The first time somebody tried to kill him was an accident.

The second time was deliberate.

Now Paul Mulchrone finds himself on the run with nobody to turn to except a nurse who has read one-too-many crime novels and a renegade copper with a penchant for violence. Together they must solve one of the most notorious crimes in Irish history . . .

A Man With One of Those Faces is the first book in Caimh McDonnell’s Dublin Trilogy, which melds fast-paced action with a distinctly Irish acerbic wit.

You can follow Caimh’s witterings (his word, not mine!) via