Today I’m featuring former journalist turned author, Audrey Davis. Audrey self published her first novel, a romantic comedy novel A Clean Sweep in June 2017, (another patiently waiting on my Kindle). Her latest work in progress is a novel exploring the themes of divorce in later life, and how age is no barrier when it comes to forming friendships and facing challenges. It will have a darkly humorous edge! That sound like another one for me.

Audrey Davis is a Scottish-born former journalist, now resident in Switzerland. Her newspaper career saw her cover events in Northern Ireland and the Falkland Islands, as well as working for a London-based movie magazine writing reviews and carrying out interviews.

Audrey followed up with a short, darker prequel A Clean Break before beginning work on a rom-com novella trilogy with a ghostly twist – The Haunting of Hattie Hastings. Again, reviews across the board were excellent, and it was combined into a standalone novel in November 2018.

She is currently working on a novel exploring the themes of divorce in later life.

Apart from writing, Audrey enjoys travel and spends a lot of time in Edinburgh. She is an avid cook, watcher of scary movies and reluctant gym-goer.

Anything by Abba. The faintest hint of Dancing Queen or Mamma Mia and I’m busting moves and warbling like Agnetha (or maybe Bjorn).

Random one. Safety Dance by Men Without Hats. Brings out the latent maypole dancer in me.

Another obscure one. Lean On Me by Red Box. Reminds me of my mum (who died when I was 23). Will one day be the closing number of the soundtrack to a book I haven’t written yet.

Sorrow by David Bowie. Had the privilege of seeing him live twice. And sorrow doesn’t describe how I felt when I learned of his death. A true legend.

Speaking of legends, the one band I wish I’d seen on stage is Queen. Like Bowie, Freddie Mercury shone bright and died too soon. So many songs to choose from, but I Want To Break Free and its deliriously bonkers video is right up there.

My toiletries. It’s a standing joke among friends that my bathroom cabinet resembles a suburban branch of Boots. New serum/hair masque/suck-them-bags-up eye cream? I fall for them all, and end up with enough stuff to rejuvenate a small, wrinkly village. Do they work? Well, I am actually 95 …

Wine. Oops. Probably negates the above. But I do love wine. And a spot of bubbly when the occasion warrants.

My wok. I cook a lot, and nothing beats a pile of chopped, peeled and fragrant bits ready to toss in that baby and emerge a steaming pile of deliciousness.

My iPad/keyboard combo. I’m writing this on my terrace and it’s cooler (been upper 30s
recently) and the lovely Apple people gave me a new keyboard for free when the old one failed. Great for travel, shame it doesn’t auto-produce amazing books.

Marks and Spencer. It’s had its ups and downs, fashion-wise, but I know I’ll always get a decent multi-pack of knickers and bras that fit.

Don’t let bad stuff force you into bad decisions. I lost both my parents when quite young, and felt alone, afraid and vulnerable.

Trust when people tell you you’re talented. As a cub reporter, I doubted myself every step of the way. I knew I could write, but – even now – when someone praises my book, I suffer from imposter syndrome.

Don’t smoke. Just, don’t. I still do (a throwback to the 80s and the sweaty newsroom, filled with a haze of Benson & Hedges and deadlines to be met). I’ve tried hypnotherapy, acupuncture, vaping and the latest tobacco sticks that heat rather than burn, but it’s a battle I haven’t yet won.

The amazing hair you had in the eighties might not be *quite* the same in later life. OK, I was a perm addict but now I’m more wispy than wanton Bananarama wannabe.

It’s OK to grow old(er). And it’s OK to be grumpy and not agree with people who piss you off. And it’s absolutely OK to speak your mind, because those who truly love you will deal with it.

I’m an advanced scuba diver who almost died in Vanuatu when I had a panic attack and nearly shot to the surface from a WW2 wreck. Luckily, my guide got me to calm down before I did something stupid.

I met Phil Collins on a Swiss ski slope and approached him with the words: ‘Phil Collins, I presume?’ Amazingly, he still chatted to me for half an hour and gave me his autograph.

I have two boys, born in Singapore and Australia, and I could easily have stayed in Oz. Loved it, but OH didn’t feel the same.

I am pretty outgoing on the surface, and use humour as a barrier, but I’m also quite shy and prone to anxiety. Cracking jokes is second nature; warding off the ‘black dog’ is a constant battle.

I absolutely adore scary movies, especially zombie ones. The Korean film ‘Train to Busan’ is one of my all-time favourites.

Tricky one. I’ve never really thought of a bucket list. I’ve been fortunate enough to travel to many countries and experience some amazing sights. But if you push me, I might say –

Go on another safari with my husband and boys. Perhaps back to Kenya/Tanzania where I’d take copious notes for the basis of a book (head like a sieve, these days!)

See the gorillas in Rwanda, and channel my inner Sigourney Weaver. Without the tragic ending, obviously.

Take my boys back to the countries of their birth. They left when they were very young, so have very few memories apart from old photographs and VHS tapes we had transferred on to DVD.

I’m going to Japan with the family in October for the Rugby World Cup. Initially, it wasn’t a country I ever yearned to see, but as I hear more and more stories from friends, I think it will be an unforgettable experience. Apart from the actual rugby (not really my thing).

Finally, I’m proud to be an indie author, but I would love if a publisher would take a chance on me. I write because I love it, and so many people have enjoyed my books, but gaining more exposure (and sales) would make me a happy little bunny.

Many thanks for having me, Jill. I feel honoured to be among such talented and well-known authors!

Audrey, the pleasure was all mine! I love getting to know about people, because underneath, whatever the perceived image is, everyone is human, with hopes, fears and dreams. You are just as important and worthy – plus you like Abba and are a toiletries junkie, so that automatically moves you up my list! I also love Sorrow by David Bowie and love that you got to see him, memories to cherish. The nearest I got was knowing that Mick Ronson used to be the gardener at my school when he worked for the local council! It is indeed OK to be grumpy, speak your mind and use humour as a barrier (were we separated at birth?) I sincerely hope you get to achieve your dreams and hope in some small way this will help you reach more readers. 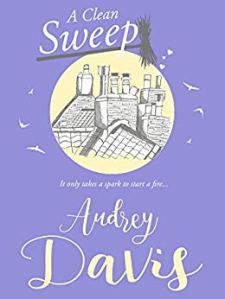 A LAUGH-OUT-LOUD TALE OF LOVE, LIES AND SECOND CHANCES …

Love comes around when you least expect it. Fifty-something widow Emily isn’t looking for romance. Nor is she expecting a hunky twenty-something chimney sweep on her doorstep.

Emily’s sister Celeste has the perfect marriage. Or does she?

Susan is single, overweight and resigned to a life of loneliness. There was the one who got away, but second chances are for other people.

Buckle up for a rollercoaster ride of emotions in a book that will grab, your heart, make you smile and wish you had a chimney to sweep. 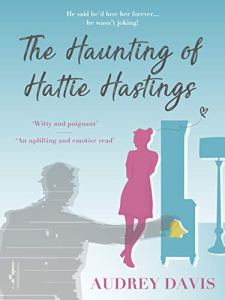 The Haunting of Hattie Hastings

A terrible tragedy leaves Hattie Hastings widowed and heartbroken.
But her late husband isn’t about to take his demise lying down.

Torn between delight and frustration, Hattie struggles to convince friends and family of her ghostly predicament.
Then there’s also the small matter of best friend Cat’s ex-husband trying to worm his way back into her life. And Hattie’s mum is battling her own demons … 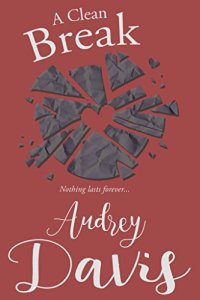 A marriage in tatters. An affair that threatens to blow their world apart. Meet Emily and Jim and discover their lives in the poignant and thought-provoking prequel to A Clean Sweep.