Today I’m delighted to feature editor and writer Esther Chilton. I first met Esther at my first Harrogate Crime event (2017) but I’ve got to know her much better through our regular Stoke author/blogger meets ups. Last year we shared another Harrogate event and this time it was like meeting an old friend (except I feel I should point out I’m the ‘old’ one). 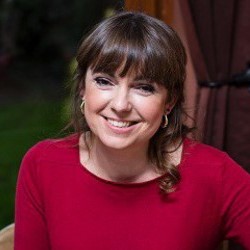 Esther Chilton is a freelance editor, tutor and writer. She has had hundreds of articles and short stories published on a broad range of topics, in all sorts of magazines and newspapers. Esther loves being a tutor for The Writers Bureau and she also helps other writers through her editing, proofreading and advice service. She has published two collections of short stories, with another on the way, as well as a non-fiction book all about how to become a published writer.

Abba – Dancing Queen – I was a young girl growing up in the 70s, so I spent many a weekend, in my room, with a friend, hairbrushes as microphones, pretending we were the two female singers in Abba. My friend was blonde so naturally she thought she should be Agnetha and I should be the brunette, Anni-Frid. I remember sulking quite a lot as I wanted to be Agnetha!

Bryan Adams – Run to you – I was only 12 when the song was released, but I fell in love with Bryan’s music and soon started collecting all his previous albums. Run to you is my favourite song of all and I’ve always had a yearning to see Bryan perform live. That became a reality when my partner surprised me with tickets to see him in concert last year. It’s a night I’ll never forget.

Phil Collins – In the air tonight – I first heard this song as a 17-year-old on my first holiday abroad – to Ibiza. I was walking on my own along the beach, the sand between my toes, gentle waves frothing, as the sun was setting and the sky glowed orangey-red. The song spilled out of a nearby bar and I found myself caught up in the moment. Whenever I hear the song, it makes me feel young again – for a few minutes, anyway!

Linkin Park – Breaking the habit – When I was studying for my Open University degree, I listened to a lot of Linkin Park. It helped me get through the six years it took to achieve my degree! I started the degree not long after having my daughter and it was a real struggle to get the old brain matter working again.

Queen – Radio Ga Ga – This is the first Queen song I remember hearing. I had it on my Now II tape (from 1984!) It’s remained my favourite Queen song over the years. My daughter and I often sing Queen songs, amongst others, while we bake. I’m tone deaf, but she doesn’t seem to mind!

My two cats, Lexi and Zafi. When I’ve had a stressful day, spending some time with them, giving them a cuddle, always calms me. They’re beautiful, loving girls who follow me round. Lexi, in particular, has to be involved in everything I do, be it trying to write an article, talk on the phone, eat dinner etc.

Books. I crave reading. There’s nothing like losing yourself in a good book.

Films. I love taking a trip to the cinema to see a new release, or curling up on the sofa with a bottle of wine and a good rom-com.

Scented candles. A scented candle can conjure up images of a magical Christmas, a walk along a beach, freshly washed towels or cookies baking in the oven. I find them very relaxing and they make your home smell very nice, too!

Be yourself. Don’t let anyone try and control you or put you down.

Don’t worry about your appearance – it doesn’t matter. It’s what’s inside that’s important.

Follow your dreams. Don’t let anyone put you off; you can achieve them.

Spend as much time as you can with your loved ones. They won’t always be here.

I nearly died at birth – though I only found out about that last year! It’s made me realise just how precious each day is.

My great grandfather was wine butler to King George V.

Before becoming a writer, I had a variety of jobs including working at Halfords, a café, Superdrug and a bank.

I had glandular fever before and during my GCSEs, which meant I was too ill to revise and struggled to take the exams. I don’t quite know how, but I managed to pass them all bar geography. But then, I have no sense of direction so I would probably have failed that even if I hadn’t been ill!

I am hopeless at drawing. My art teacher couldn’t hide her glee when I gave it up as a subject. My daughter is brilliant at art so clearly doesn’t get that from me. She remains determined to teach me to draw. So far, her efforts have failed.

Visit New York at Christmas. I’ve never been, but I’d love to see the dazzling lights, vibrant and creative store displays and the many other delights New York has to offer.

Go on a zip wire. I’ve watched people race down a zip wire many times and yearned to join in, but a back injury has so far prevented me from doing it.

Go on a cruise. I’ve heard so many wonderful things about them and it’s a way of travel I’ve never undertaken.

Run. I used to run before my back was injured and I haven’t been able to run for over thirty years. One day, I’d love to be able to do it again.

Thanks so much for joining us Esther, you’ve given me plenty to talk about when I next see you! I think Dancing Queen (quite rightly) is becoming the number one choice in our musical Fives ( I wonder if they’d like to take part …?) Must try the salted caramel M&M’s. I’m afraid I had a Peter Kay ‘garlic bread’ approach to salted caramel until I tried it – yes I can now see the appeal. I’m with you on the passing years approach, enjoy the moment is definitely the way to go. Age will come soon enough. I bet your great grandfather had some some stories he could tell, though whether he ever did you’ll have to let me know! Here’s hoping you get to tick off some of your to-do list. New York sounds good to me if you ever need a partner! 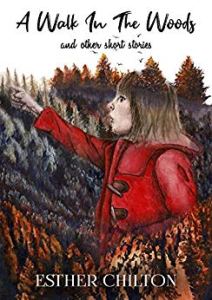 A Walk in the Woods and other short stories

An autumnal stroll through the woods, colourful leaves crunching underfoot, the air fresh on the face, laughter and lightness portraying a happy mother and daughter scene. But something isn’t right…

A young boy who thought he knew his parents finds out that he doesn’t know them at all.

Have you ever wondered what it would be like to die and then to look down upon yourself?

These are just a few of the scenes and scenarios found in A Walk In The Woods and other short stories. There are stories to make you smile, tales to bring a tear and stories to shock as well as delight.

The Siege and other award winning short stories

Freelance writer and The Writers Bureau tutor, Esther Newton brings twelve of her award winning short stories together in a collection for the first time. Prepare to be on the edge of your seat one moment as a woman is held hostage at gunpoint, smiling the next at a tale of a Fairy Godmother with a difference, before rooting for a young girl who’s cornered by a school bully and then reaching for the tissues, along with a mother whose daughter has been missing for days.

Keep in touch with Esther via