In Ink by Dave Sivers : a guest post ahead of publication @DaveSivers #NewPublication #CrimeFiction

Today I’m delighted to host Dave Sivers with a guest post ahead of the publication of his new crime novel In Ink.  The book is the first in a new series which sees the introduction of a new character in the shape of DI Nathan Quarrel and I for one am looking forward to getting to know him. Here Dave explains more about the character and how he came to life.

New Beginnings, New Characters, and the Importance of Back Story

My new book, In Ink, marks a new chapter in my writing life. After five Archer and Baines books, I’d got the  writer’s equivalent of itchy feet – itchy typing fingers maybe? – to create and discover some new characters. There is another Archer and Baines in the works now, but I’m glad I created DI Nathan Quarrel and his team for In Ink.

I do a lot of author events, and I often talk about how the characters of Lizzie Archer and Dan Baines came to me. It was during a break in Crimefest down in Bristol. Coffeed out, and with an aisle seat where I could stretch my long legs, I decided to stay in the hall. I’d never done it before at a festival and have never done it since. Perhaps I should. Because, in that 20 minute break, it was as if Archer and Baines came up behind me, tapped me on the shoulder, and started telling me their stories. I had a note pad with me, and by the end of that break, I had quite detailed notes for them, and I knew what their first case would be.

It’s not too much of a spoiler to tell you a little of the two characters’ back stories. It’s in the blurb for the first book, The Scars Beneath the Soul. More than ten years before the characters meet in the book, Baines’s wife was murdered by a serial killer and his young son disappeared; Jack hasn’t been seen or heard of since. Archer arrives at Aylesbury Vale, where the team are based, having literally run away from London and the Met after being disfigured while making an arrest. Those shocking events in their lives are the beginnings of a journey they are on and I know from feedback that readers probably enjoy keeping up with them and the other characters as much as trying to beat the cops in solving the mystery.

Nathan Quarrel came into my life very differently. He came out of a character creation workshop run by the brilliant Julie Cohen at my local writers’ group, where I’ve been a member for some 27 years. By the end of the session, I knew who he was, what he looked like – and some of his secrets.

I knew I had to use him, and he was perfect for a serial killer story that was rattling around in my head.one that my instincts told me wasn’t an Archer and Baines case. Maybe it was just that desire to work with a new cast of characters.

And, of course, the cast is more than just the main protagonist. Quarrel has a team and a boss. They each have their back stories. In this book, it’s mostly glimpses of things yet to emerge into the full glare of daylight.

But here’s the thing.

If there’s one thing I’ve learned from writing novels, it’s that neither the story, nor the lives of the characters, begin on Page 1. Those characters, and the world they inhabit, exist long before we first encounter them in the book. Sure, you can make up all that history as you go along, but that’s really the wrong way round. If you already know many of the key events and influences in their back stories, then how and why the characters respond to events in the book will come as naturally to the author as they do to real people.

So, if you happen to read In Ink, I hope you enjoy meeting Nate Quarrel and his team, and I hope they capture enough of your interest for you to want to see more of them.

In Ink is published tomorrow in paperback and eBook but is already available to pre-order on eBook today. 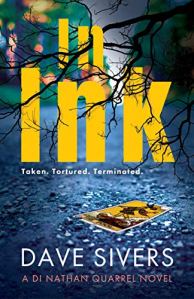 In Ink by Dave Sivers

A cruel death. A macabre calling card.
A killer on a mission.

A body is found outside a church in a small Hertfordshire town. Alastair Murdoch suffered before he died. But what really disturbs DI Nathan Quarrel is the Tarot card motif adorning the body: The Fool.

Unless Quarrel can decipher the meaning behind the cards and the connection between the victims, more will follow in a twisted agenda of abduction, pain and death.

Dave grew up in West London and has been writing all his life. His books include the popular crime series featuring the Aylesbury Vale detectives, DI Lizzie Archer and DS Dan Baines. The Scars Beneath the Soul and Dead in Deep Water were both top three bestsellers in the Amazon Kindle Serial Killers chart. His next novel, In Ink, introducing DI Nathan Quarrel, will be published in May. Dave lives in Buckinghamshire with his wife, Chris, and is a founder of the annual BeaconLit festival of books and writing.