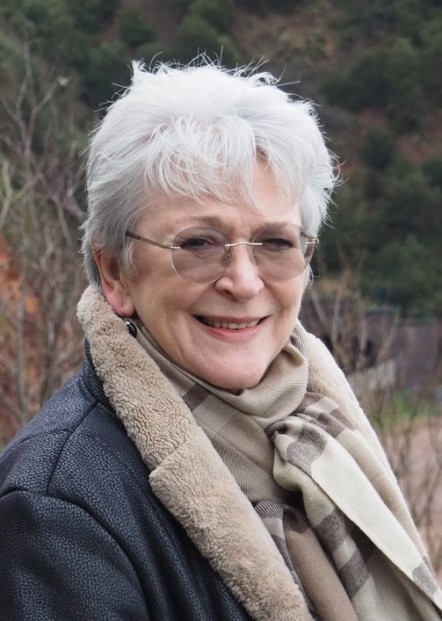 Lynne is a Surrey gal living in Devon. Her education and training was via Wimbledon School of Art, University of Reading (BA in Eng Lit) and the Regional Theatres Trainee Directors’ Scheme. She spent 25 years in the theatre descending from the heights of stage hand to the depths of director in regional rep and touring theatre, The Young Vic and National Theatres (and, memorably, Broadmoor Hospital).  Lynne has over fifty original and co-written writing credits for theatre, dramatised three Dickens novels for GSA, and adapted Priestley and Shakespeare for BBC Radio.

Alternative employment as silver service waitress, metal hardening operative, mystery shopper, telesales failure and NHS Healing Arts Manager – all in preparation to becoming a full-time writer, naturally. As you might guess from her books Lynne is also a Grecophile.

The first would have to be ‘Puffin’ Billy’, the theme tune to Uncle Mac’s Favourites. Happy childhood Saturday mornings.

Next, ‘Can’t Buy Me Love’, not because it’s my favourite Beatles’ song, but because my mother bought the single for my brother and me as a surprise gift. Unfortunately, she brought it home in a shopping bag with a meal of fish and chips and the heat bent it. Ever resourceful, she ironed it between two pieces of newspaper, after which, it played ‘sort of’ all right on the Dansette.

Third – The Kinks’ ‘Lola’, soundtrack to my first infatuation. My fondness of the song outlasted the brief relationship by many years.

Fourth – Gymnopédie by Erik Satie. Its haunting melody caught my senses the first time I heard it. I used it in a children’s play as they waved coloured muslin to make a rainbow.

Fifth – so difficult to choose, having grown up during the sixties and seventies with such fabulous music. A long theatre career means there are also many associations with musicals (love ‘Cabaret’), and yet, Carly Simon’s ‘You’re So Vain’ whizzes me back to working on props at the Savoy Theatre. On the other hand, Mozart’s concerto for harp and flute soothes the cares away. Difficult. Oh, all right, Bohemian Rhapsody. Still in love with Queen.

What 5 things (apart from family and friends) would you find it hard to live without.

A dog (a living ‘thing’). Lost my Jack Russell, Millie, in 2012 and still find it hard living without her.

A computer (for writing & reading).

Don’t work for other people’s approval. Value yourself and your own high standards.

Go out, see the world and have fun – it’s a big place and the years will fly.

Equality will be a long time coming. Don’t wait for it, you can and will do a better job than most men.

As in the song, ‘Everybody hurts…sometime’. You’re not the only one.

I have a bronze medal for Scottish Country Dancing and can do the Highland Fling and the Sword Dance. Not so much of late…

I had a summer job at a greetings card factory when I was at Art School. When we got bored of sticking down squashy satin boards with cute pictures on the front, we used to write rude – sometimes very rude – messages on the card before sticking the satin board on top. I wonder did anyone ever find them?

I have been on stage five times, one of which was as a removals man (dressed in a brown overall, big hat and false moustache) in a farce at Butlin’s Rep – I was actually Deputy Stage Manager but they were short an actor – I behaved disgracefully, turned upstage, opened my overall, flashing my topless self to the actresses on stage and walked off, leaving them to deal with the…fallout?

I shook hands with Tony Benn.

I can’t shrug off the old superstitions my family instilled in me…still say ‘White rabbits’ three times on the first of every month, won’t pass on the stairs, walk under ladders or put new shoes on the table. If I put something on inside out, I either wear it that way all day or take it off, and if I forget something and have to go back home, I always sit down and count seven…no, that last one’s not true. Sometimes I say ‘Sod it’ and go straight back out.

Tell us 5 things you’d like to do or achieve.

Live in Greece / learn Greek (not going to happen)

Try to stop drinking so much red wine

Thanks so much for sharing with us today Lynne. I love your music choices, perhaps The Beatles track for all the wrong reasons –  hope the fish and chips were worth it! You know I’m with you on the Jack Russell front – sincerely hope that having another dog moves from a dream to reality. Not sure tweezers are your friend given your advice to your younger self though! I’d love to have seen the faces of anyone discovering your added messages on their cards – just as well it was only a summer job, I suspect it may not have lasted too long. Keep on writing and I’d love that move to Greece to be an option for you.

(NB both books are currently 99p for Kindle – affiliate links)

Growing up at last?

Clair knew what was coming.

There’s a big birthday looming. Clair tries hiding from it on the Aegean island of Symi, Greece. Inevitably it catches up with her. But so do a couple of possibilities, interesting, attractive ones…Encouraged, she departs the Greek idyll to face the reality of her demanding daughter, her hypercritical mother, and the special person in Scotland who keeps her sane. But there’s a secret she keeps from them all. In the coming year, she will swallow a lot of raisins, sweet and sour, in England, Scotland and Florida. She will discover plenty – and forget a few things (it was a BIG birthday), and, reluctantly, reveal her secret. Mother, daughter, niece, lover, reluctant teacher and neglected artist – will the real Clair Harkin please grow up?

Know who your friends are…

On a holiday escape to the Greek islands, Annie Buchanan discovers what – and then who – is missing from her life.

When single mother, Annie, and son Jude take a break away from Scotland to stay with her brother and friends on Symi, they find the warmth and support they need. As they relax into the familiar rhythm of island life, old and new acquaintances change the course of their vacation. Whether it’s for better or worse, Annie will discover when she visits the island of Leros. There she may be able to put together some of the missing pieces in her life and learn who her friends really are. But she cannot be prepared for some uncomfortable truths about the past and the dramatic way in which they will change the present for her… and Jude.